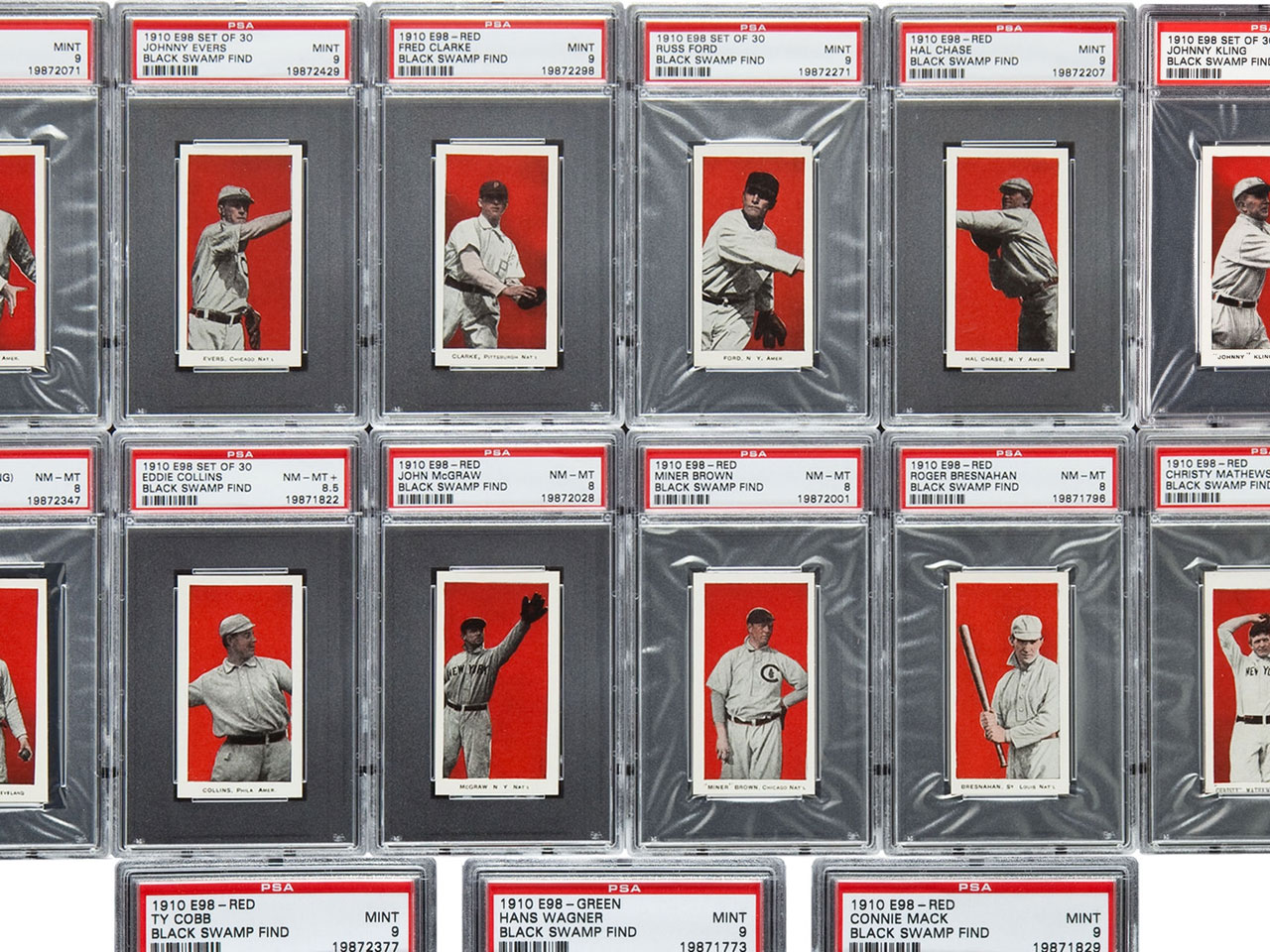 (AP) DEFIANCE, Ohio - Karl Kissner picked up a soot-covered cardboard box that had been under a wooden dollhouse in his grandfather's attic. Taking a look inside, he saw hundreds of baseball cards bundled with twine. They were smaller than the ones he was used to seeing.

But some of the names were familiar: Hall of Famers Ty Cobb, Cy Young and Honus Wagner.

Then he put the box on a dresser and went back to digging through the attic.

It wasn't until two weeks later that he learned that his family had come across what experts say is one of the biggest, most exciting finds in the history of sports card collecting, a discovery worth perhaps millions.

The cards are from an extremely rare series issued around 1910. Up to now, the few known to exist were in so-so condition at best, with faded images and worn edges. But the ones from the attic in the town of Defiance are nearly pristine, untouched for more than a century. The colors are vibrant, the borders crisp and white.

"It's like finding the Mona Lisa in the attic," Kissner said.

Sports card experts who authenticated the find say they may never again see something this impressive.

"Every future find will ultimately be compared to this," said Joe Orlando, president of Professional Sports Authenticator.

The best of the bunch — 37 cards — are expected to bring a total of $500,000 when they are sold at auction in August during the National Sports Collectors Convention in Baltimore. There are about 700 cards in all that could be worth up to $3 million, experts say. They include such legends as Christy Mathewson and Connie Mack.

Kissner and his family say the cards belonged to their grandfather, Carl Hench, who died in the 1940s. Hench ran a meat market in Defiance, and the family suspects he got them as a promotional item from a candy company that distributed them with caramels. They think he gave some away and kept others.

"We guess he stuck them in the attic and forgot about them," Kissner said. "They remained there frozen in time."

After Hench and his wife died, two of his daughters lived in the house. Jean Hench kept the house until she died last October, leaving everything inside to her 20 nieces and nephews. Kissner, 51, is the youngest and was put in charge of the estate. His aunt was a pack rat, and the house was filled with three generations of stuff.

They found calendars from the meat market, turn-of-the-century dresses, a steamer trunk from Germany and a dresser with Grandma's clothes neatly folded in the drawers.

Months went by before they even got to the attic. On Feb. 29, Kissner's cousin Karla Hench pulled out the dirty green box with metal clips at the corners and lifted the lid.

Not knowing whether the cards were valuable, the two cousins put the box aside. But Kissner decided to do a little research. The cards were at his office in the restaurant he owns when he realized they might have something. He immediately took them across the street and put them in a bank vault.

Still not knowing whether the cards were real, they sent eight to expert Peter Calderon at Heritage Auctions in Dallas, which recently sold the baseball that rolled through the legs of Boston Red Sox first baseman Bill Buckner in the 1986 World Series for $418,000.

Calderon said his first words were "Oh, my God."

"I was in complete awe," he said. "You just don't see them this nice."

The cards are from what is known as the E98 series. It is not clear who manufactured them or how many were produced, but the series consists of 30 players, half of them Hall of Famers.

The experts at Heritage Auctions checked out the family's background, the age of the home and the history of the meat market. They looked at the cards and how they were printed.

"Everything lines up," said Chris Ivy, the company's director of sports auctions.

They then sent all the cards to Professional Sports Authenticator, which had previously authenticated fewer than 700 E98s. The Ohio cards were the finest examples from the E98 series the company had ever seen.

The company grades cards on a 1-to-10 scale based of their condition. Up to now, the highest grade it had ever given a Ty Cobb card from the E98 series was a 7. Sixteen Cobbs found in the Ohio attic were graded a 9 — almost perfect. A Honus Wagner was judged a 10, a first for the series.

In a measure of what baseball cards can be worth, the owner of the Arizona Diamondbacks paid a record $2.8 million for a rare 1909 Honus Wagner. Another version of the card brought $1.2 million in April.

Heritage Auctions plans to sell most of the cards over the next two of three years through auctions and private sales so that it doesn't flood the market. In all, they could bring $2 million or $3 million, Ivy said.

The Hench family is evenly dividing the cards and the money among the 20 cousins named in their aunt's will. All but a few have decided to sell their share.

"These cards need to be with those people who appreciate and enjoy them," Kissner said.