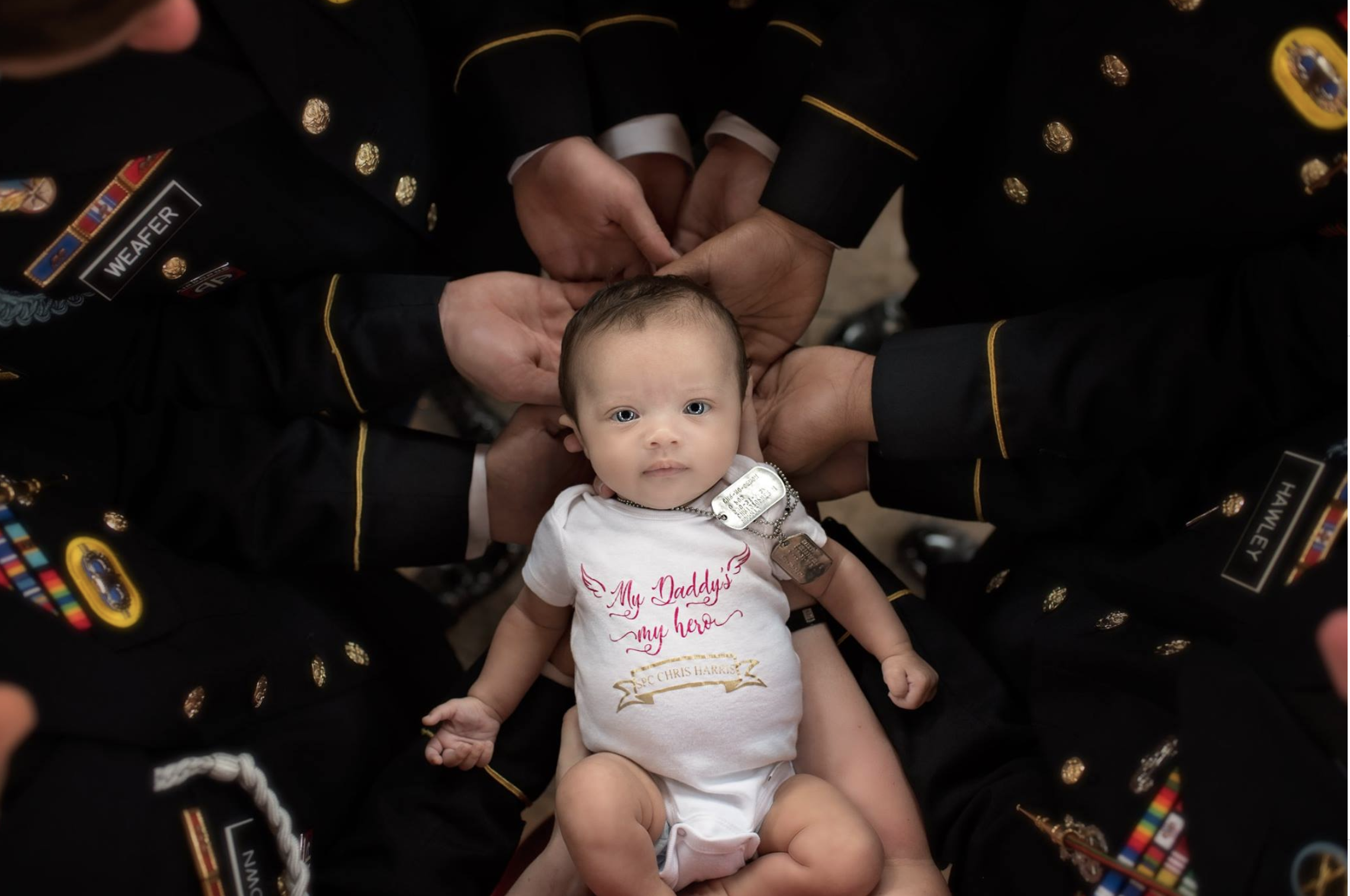 U.S. Army Spc. Chris Harris was killed in Afghanistan last August when a suicide bomber attacked a NATO convoy. Before his life was taken too soon, the 25-year-old soldier from North Carolina had just received the happiest news.

Just one week earlier, Harris found out his wife, Britt, was expecting their first child. Britt Harris broke the good news to her husband over FaceTime. She created a handmade onesie that said "Chris you're going to be a DAD!"

Harris would not be there to celebrate the upcoming milestones in his new baby's life, but since he considered his fellow soldiers part of his extended family, Britt wanted them to share in his legacy. CBS New York reports she came up with the idea of including her husband's "brothers" -- the 2nd Battalion, 504th Infantry Regiment, 1st Brigade Combat Team, 82 Airborne Division, known as the "Devil Brigade" -- in the gender reveal of her child.

So, Britt sent the troops a box of confetti poppers when she found out the sex of her baby. When the troops popped them open, pink confetti flew out. Britt was having a girl, and her husband's "brothers" were just as excited for her as her real family.

The moment was caught on camera and one of the soldiers, Joel Crunk, posted the video on YouTube. "August 2 2017 Chris Harris laid down his life for our country," Crunk wrote. "His newly wed wife was expecting their first child. The reveal is in Afghanistan with the men who fought by his side. We are happy to welcome the new member of our company."

Britt gave birth to the baby girl on March 17, 2018. She named her after Chris: Christian Michelle Harris. The proud mom's social media posts are filled photos of Christian -- from pictures of the newborn with her dad's Army fatigues, to a special trip to Washington, D.C., Britt documented it all.

But she wanted to get special professional photos taken of the baby, and started brainstorming for a way to incorporate Harris' Army brothers.

Britt invited her husband's fellow soldiers, who were home from Afghanistan, to join her daughter's photo shoot. The soldiers coincidentally came home the day Christian was born, which made their homecoming that much sweeter.

"Knowing that we could come home to a baby girl, that was awesome," said Sgt. Nathan Arthur Bagley. "When everyone came home, that was the day she was born so that made it ten times better."

As if they were her own family, about 20 men showed up to the shoot to celebrate Christian, dressed in the military uniforms. They held the tiny baby and posed for the photographer. Christian wore a special onesie for the occasion: "My Daddy, my hero" it said.

A video was posted to Facebook, which you can watch below or by clicking this link.

In one stunning photo, the men form a circle with their palms in the center. Resting in the middle of their hands, Christian lays looking up at the camera.

"Sometimes all we need to soothe our soul and ease our burdens is the loving hand of a friend gently touching our heart and lifting us towards love," the caption reads, a powerful quote that appears to have originated with author and motivational speaker Mimi Novic.

As Christian's big eyes stare into the camera, a glimpse of her father shines through. And with his fellow soldiers there to hold her, Christian was closer to her dad than ever.