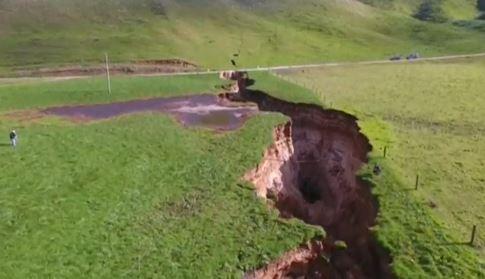 WELLINGTON, New Zealand -- A spectacular sinkhole the length of two football fields and the depth of a six-story building has opened up on a New Zealand farm. A worker stumbled upon the chasm before dawn this week when he was rounding up cows for milking on the farm near the North Island town of Rotorua.

It appeared after several days of heavy rainfall.

Farm manager Colin Tremain told Newshub television he didn't realize just how big the hole was until he saw it in the daylight. He says the area often develops sinkholes due to degrading limestone rock beneath the ground's surface.

GNS Science volcanologist Brad Scott told Newshub the sinkhole was three times larger than any he'd seen before. He says an underground cavity would have developed over decades, and that the region will see more sinkholes open up in the future due to its geological makeup.

At the bottom of the hole, Scott told TV New Zealand that he could see "the original 60,000-year-old volcanic deposit that came out of this crater."

Tremain says he's planning to install a fence so livestock don't fall into the sinkhole.