(NEW YORK) Republican vice presidential nominee Sarah Palin travels in style. Everywhere she goes, she is accompanied by a Secret Service ensemble and a caravan of vehicles holding campaign staffers and members of the media. 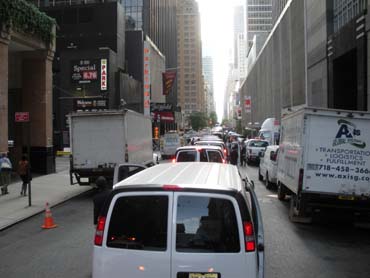 As Palin's motorcade travels on highways and one-way streets across the nation, local police block off traffic, and onlookers stop in their tracks by the side of the road to gawk and take pictures.

But it's a different story in Manhattan, where blaring sirens and street congestion are greeted by annoyed glares rather than wide-eyed stares.

As Palin's motorcade made a short trip across midtown this morning from the governor's hotel to the Clinton Global Initiative's annual meeting, pedestrians marched impatiently between vans, rather than waiting for the motorcade to pass by. 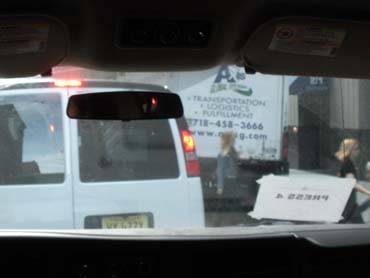 At a particularly congested intersection, the driver of one of the press vans leaned out the window to issue a friendly reminder to one pedestrian who tried to break the integrity of the motorcade. "I'll run you over!" she told the man in a tone of voice that was quintessentially New York.

*Update:* En route to Newark Airport, the same driver sideswiped a Cadillac, causing minor damage to the car. The Secret Service agent sitting beside the driver told her to keep going, but the NYPD had other ideas. A police officer instructed the press van driver to pull over on 12th Avenue, and insurance information is currently being exchanged.

NYPD officers weren't happy with the defiant pedestrians, but they weren't exactly in a position to stop and issue jaywalking tickets. 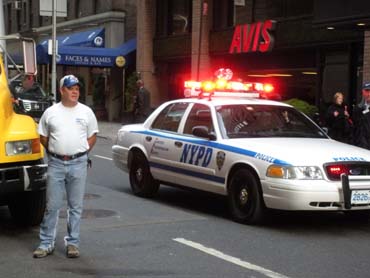