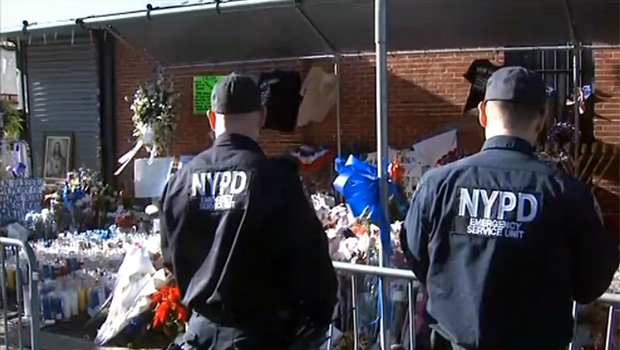 NEW YORK - As New Yorkers continue to pay their respects to NYPD fficers Rafael Ramos and Wenjian Liu, who were gunned down last Saturday, their families are preparing to lay them to rest.

A wake for officer Ramos will be held Friday at Christ Tabernacle Church in Glendale, Queens, and his funeral will take place there on Saturday, CBS New York reported.

Vice President Joe Biden will attend Ramos' funeral. More than 20,000 officers from around the country are expected.

A funeral for officer Liu will be scheduled after relatives can be flown to the U.S. from China.

On Christmas Day, New Yorkers continued to pay their respects at the memorial to the two fallen policemen in the Bedford-Stuyvesant section of Brooklyn.

Some were struck by how much the makeshift memorial has grown. "It was two or three candles, and now look at it," Ivette Del Valle told CBS2's Sonia Rincon. Del Valle has relatives who are auxilliary officers and made it a point to stop by while she's here visiting family.

"You have to see more of your family, because you never know," she said.

Sophia Smith told 1010 WINS radio she was thinking about the families of the slain officers.

"They, like, can't enjoy their Christmas. They can't be together," Smith said.

Many of those visiting are off-duty policemen and women, along with their loved ones, Rincon reported.

"You have families right now that's in deepest sorrow, right now, because of the loss of their loved ones," said Sgt. Kevin Prentice. "And while everyone else is celebrating, they're planning a funeral."

In a Christmas message to NYPD personnel working on the holiday, Commissioner Bill Bratton said, "When your shift has ended, be sure to take the time to hold your loved ones close."

Bratton called on officers to remember their duty to protect the humblest among us on this holiday, and to keep their spirits up. "In the face of sorrows, be of good cheer. In the face of danger, be resolute. And, as ever, be safe," he said.

"New York is strongest when everyone joins together, and this holiday I ask all New Yorkers to join me in pausing to remember NYPD Officers Wenjian Liu and Rafael Ramos and offer support to their families any way we can," Cuomo said in a Christmas Day statement.

Donations to the Liu and Ramos families can be made through several charitable organizations, including the Stephen Siller Tunnel to Towers Foundation. To make a donation, click here.

JetBlue said it has offered to fly the families of Ramos and Liu to the funerals. The airline is also offering free flights for up to two officers from each law enforcement department in the country, space permitting.