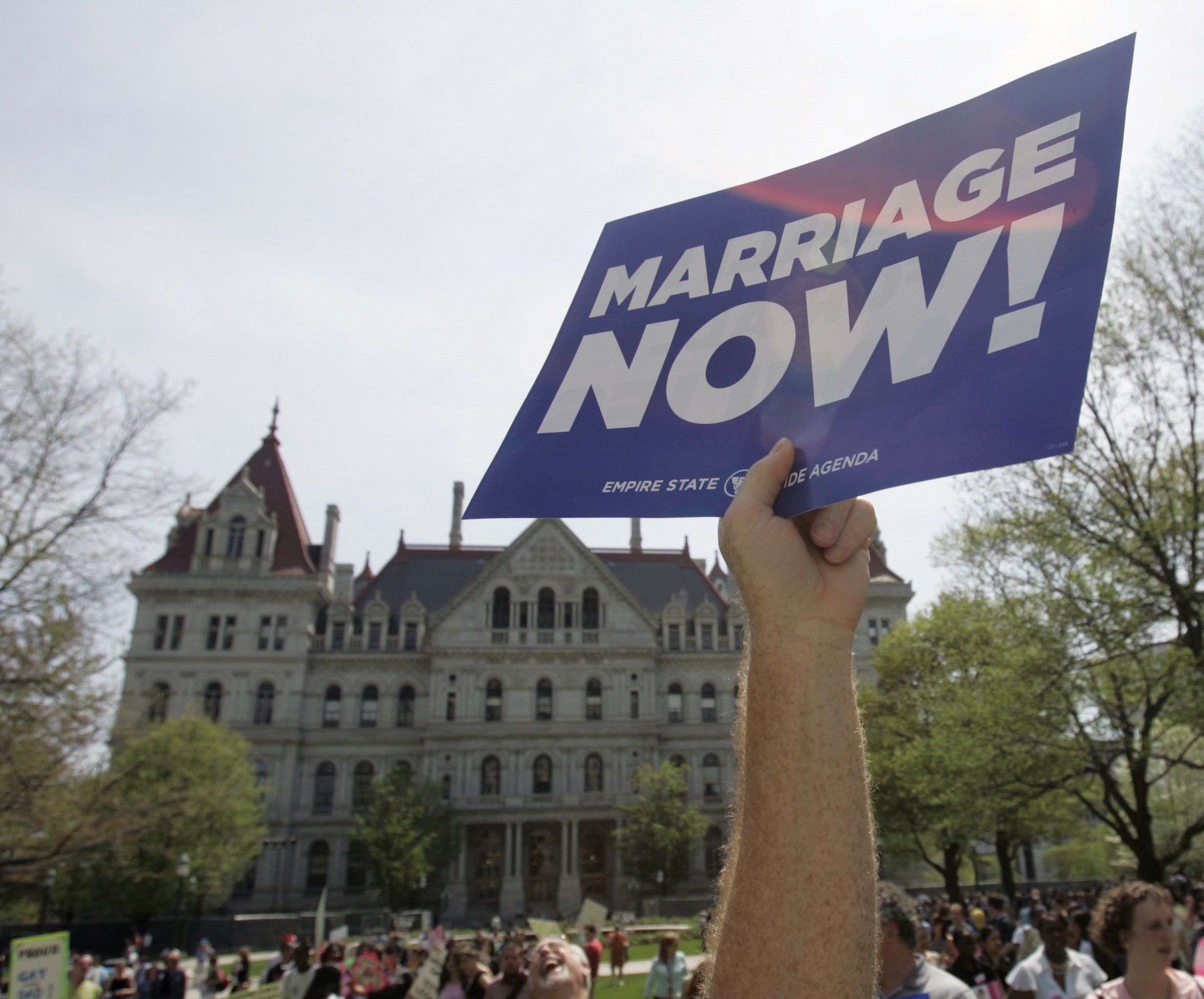 ALBANY, N.Y. (AP) - Lady Gaga on stage on Long Island this weekend, actors Kevin Bacon, Kyra Sedgwick and Julianne Moore on video and Gov. Andrew Cuomo in Albany are headliners in New York's growing push to legalize gay marriage, a fight that may already be won thanks to shifting voter sentiment and a concerted, disciplined campaign.

New Yorkers opposed to gay marriage are being swamped by younger people who support it, while polls seem to show a new tactic by advocates is working in the suburbs and upstate, the more conservative region where the issue will be won or lost.

Five states, New Hampshire, Vermont, Connecticut, Iowa and Massachusetts, and the District of Columbia have approved gay marriage laws. New York has always been a goal of advocates because of its size, high profile and unparalleled media presence.

"A win in New York will provide significant momentum for the movement nationally and, quite frankly, internationally," said Brian Ellner of the Human Rights Campaign, working for same-sex marriage. "New York is very significant."

Lady Gaga recently told fans at her Buffalo concert to contact state lawmakers and urge them to pass a gay marriage bill. She's expected to make the same plea at her Long Island concert. Bacon, Sedgwick and Moore are among celebrities in a series of videos with a similar message.

The organized effort under Cuomo is a turnaround from the surprising 2009 defeat in the state Senate, which fell eight votes short of passage in the 62-seat chamber after strong approval in the Assembly. Back then, advocacy groups operated more independently, sometimes alienating as many lawmakers and their constituents as they won over.

But those votes were just a prologue to today, said Bruce Gyory, a political science professor at the University at Albany who analyzes voter trends.

Despite failing in 2009, the debate demonstrated some of the Legislature's greatest displays of eloquence - personal stories of sons and daughters denied the joys and rights of marriage - and did what is rare in Albany: It changed votes.

"In my view, that wasn't an isolated phenomenon," Gyory said. "That debate has been replicated hundreds and thousands of times over the Internet, emails and coffee klatches and over glasses of wine in New York's suburbs that has rapidly changed - at an accelerated pace - public opinion."

Advocates for gay marriage learned the power of personal persuasion over in-your-face parades long ago. Fred and Heidi Perkins held a letter-writing open house at their Plainview home in Nassau County, a key area for the issue and where their gay son wants to be married. They said 70 neighbors showed up.

"We want to dance at our son's wedding," said Iris Blumenthal, 68, of Syosset, Nassau County, and another longtime advocate. "I would love if these senators were in my shoes. What if their child came out as gay and said they wanted to get married?"

A year ago, Gyory's analysis showed support for gay marriage was rising 1 to 2 percent a year nationally as opposition declined by the same amount. But, he said, national polls now show support climbing at 2 to 4 percent a year, led by coastal states including New York.

In New York, the Siena College poll this month found a new high for support - 58 percent. The poll showed reliable voters 55 and older were divided on the issue, not strongly opposed, and that the influential independent vote favored same-sex marriage. On April 14, a Quinnipiac University poll found opposition continued to fall toward 30 percent.

"I think at the point you cross 60 percent and approach 2:1 levels of support, the opposition loses its critical mass," said Gyory, a former aide to three New York governors.

And politicians poll such issues extensively within election districts, something public polls haven't yet done.

"You clearly don't want to be behind it," Gyory said. "This is a runaway freight train in the suburbs."

Upstate and suburban Republicans in the Senate also might prefer to dispatch the difficult issue this year rather than in 2012 when they will be up for re-election, especially with a popular governor taking a lead role.

"This is an important issue for the administration, and the governor is committed to working with New Yorkers to get the marriage equality legislation passed," said Cuomo spokesman Richard Bamberger.

That drew some rare public criticism of the powerful Democrat.

"I am deeply offended that during this Holy Week, which is a most sacred time to millions of New Yorkers, Gov. Cuomo is working hard to mobilize elected officials to legalize homosexual marriage," Diaz said of the announcement made in The New York Times between Passover and Easter to promote "a radical agenda."

"I know there are some polls that show things are changing," Libous said, emphasizing that he's not speaking for the conference.

"I know my constituency, particularly my base, is very much against it. At the end of the day, if a measure like this comes to the floor, it really is up to each individual member."

But for state Conservative Party Chairman Michael Long, whose endorsement is important to Republicans, same-sex marriage is "a line in the sand." Long notes one finding lost in much of the public debate: Just 6 percent of New Yorkers in this month's Quinnipiac poll said same-sex marriage should be the top issue in Albany.

"This is nothing but a political issue," Long said. He said gays are part of a "very well-heeled community" that can achieve its rights under existing laws through the courts and contracts.

"No one in the Conservative Party wants to take away any rights away from anybody," Long said. "But nobody wants to see the institution of marriage destroyed to give more rights to some people."