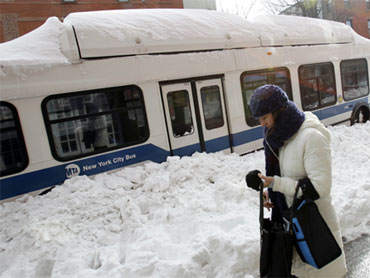 Mayor Michael Bloomberg said that hundreds of city buses and dozens of ambulances remained stuck in the snow throughout the city, and officials predicted streets would not be clear for another 24 hours, a day later than they first promised.

"The bottom line is, we're doing everything we possibly can and pulling every resource from every possible place to meet the unique challenges that this storm is posing," Bloomberg told reporters Tuesday.

Residents outside Manhattan complained of a sluggish response by snow plow crews who still hadn't finished clearing the streets. Fire officials said the unplowed streets and abandoned cars made it harder to respond to emergencies, including a five-alarm, wind-whipped blaze at a Queens apartment building Monday night.

Officials pleaded with residents to cooperate with plowing efforts.

"If people dig out and they don't pile the snow in the street again when they dig out their car of their driveway, it's going to go quicker," Sanitation Commissioner John Doherty told CBS News Station WCBS-TV in New York. "But if they continue to throw it out into the street, we have to go back there to clear that street, and consequently we don't get to that tertiary street or that dead-end street that we're trying to clear out."

Even so, plenty of people were frustrated to still be stuck in the aftermath of the sixth worst storm to ever hit the Big Apple.

"This is impossible," one Bergen Beach, Brooklyn, resident told WCBS-TV. "I've lived on this street for 24 years and never, ever, ever were we not plowed. We're really frustrated no one on the block, no one in the neighborhood could move."

"In Brooklyn, we are stranded," a Brownsville, Brooklyn, resident told WCBS-TV. "We can't get to work. The buses aren't running. The L (subway) train isn't running, and the streets have not been cleaned, not been plowed at all."

"The fact that there has been no plow in this neighborhood at all is a disaster," Dromm told WCBS-TV. "It's hard to understand why the city was so unprepared for this storm because we knew for a long time that it was coming."

Bloomberg told reporters the city simply does not have enough tow trucks and crews to dig out the abandoned vehicles, and has been pleading with private companies to help out.

Some 1,000 vehicles have been removed from three major New York City-area expressways alone, he said.

The storm, which dumped 20 inches of snow in Central Park Sunday, was New York City's sixth-worst since record-keeping began in 1869, said Adrienne Leptich, a meteorologist with the National Weather Service. A February 2006 storm dropped 26.9 inches of snow on Central Park, breaking the previous record, set in 1947, by half an inch.

Bloomberg said emergency vehicles erred in trying to navigate unplowed streets during the storm, and New Yorkers also should not have ignored warnings and driven during that time.

"This is going on Day 3, and usually what we see is a plow coming down the street on the day when the storm starts then you see something coming the day after, and basically the third day you expect it to be clear, but that's not what happened here," Dromm said.

Many residents are putting the blame on Bloomberg.

"He is not doing what he is supposed to do," one woman told WCBS-TV. "He's not running the city. We're wondering what is happening."

"I think the mayor must be living in another world if he thinks that the response to this has been satisfactory," Dromm told WCBS-TV.

The fire department said it received more than 4,000 calls during the storm - its busiest day in recent memory, apart from the 2001 Sept. 11 attack.

In Brooklyn Heights, Brooklyn, city workers had frustration of another kind, when sanitation crews decided to tow out one of their stuck plows the hard way, with construction equipment.