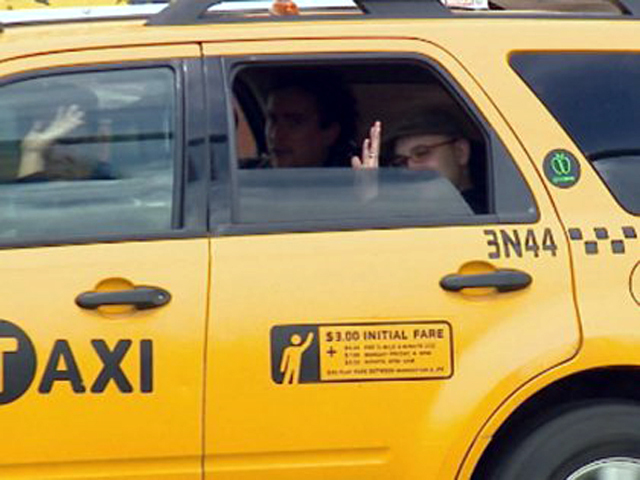 John Belitsky, son of a former New York City cabbie, said the trip started as a bit of a challenge. Belitsky said his father told him that no cab driver would ever drive someone that far.

According to Belitsky's Twitter feed, he and friend Dan Wuebben found a driver at LaGuardia Airport Saturday who signed up for the trip in exchange for $5,000. (For comparison, a search of travel websites showed that two first-class seats on a round-trip flight departing New York Wednesday for Los Angeles would cost a minimum of $3,494.)

"It was a great idea," Belitsky told KCNC-TV. "We've met a lot of fun people, seen a lot of interesting things. I proved my father wrong."

The driver, Mohammad Kalam, noticed a few differences between roads in New York and the West.

"This is a long road, wide road," Kalam told KCNC-TV. "There are no people. New York is too crowded, a lot of people, a lot of cars. There are no cars here, I think."

Along their 2,800-mile route, they took Interstate 80 from New York to Nebraska and then headed south on Interstate 76 toward the Denver area, where they stopped for an oil change.

On Tuesday, they planned to take Interstate 70 to Utah and eventually drive down Interstate 5 to Los Angeles.