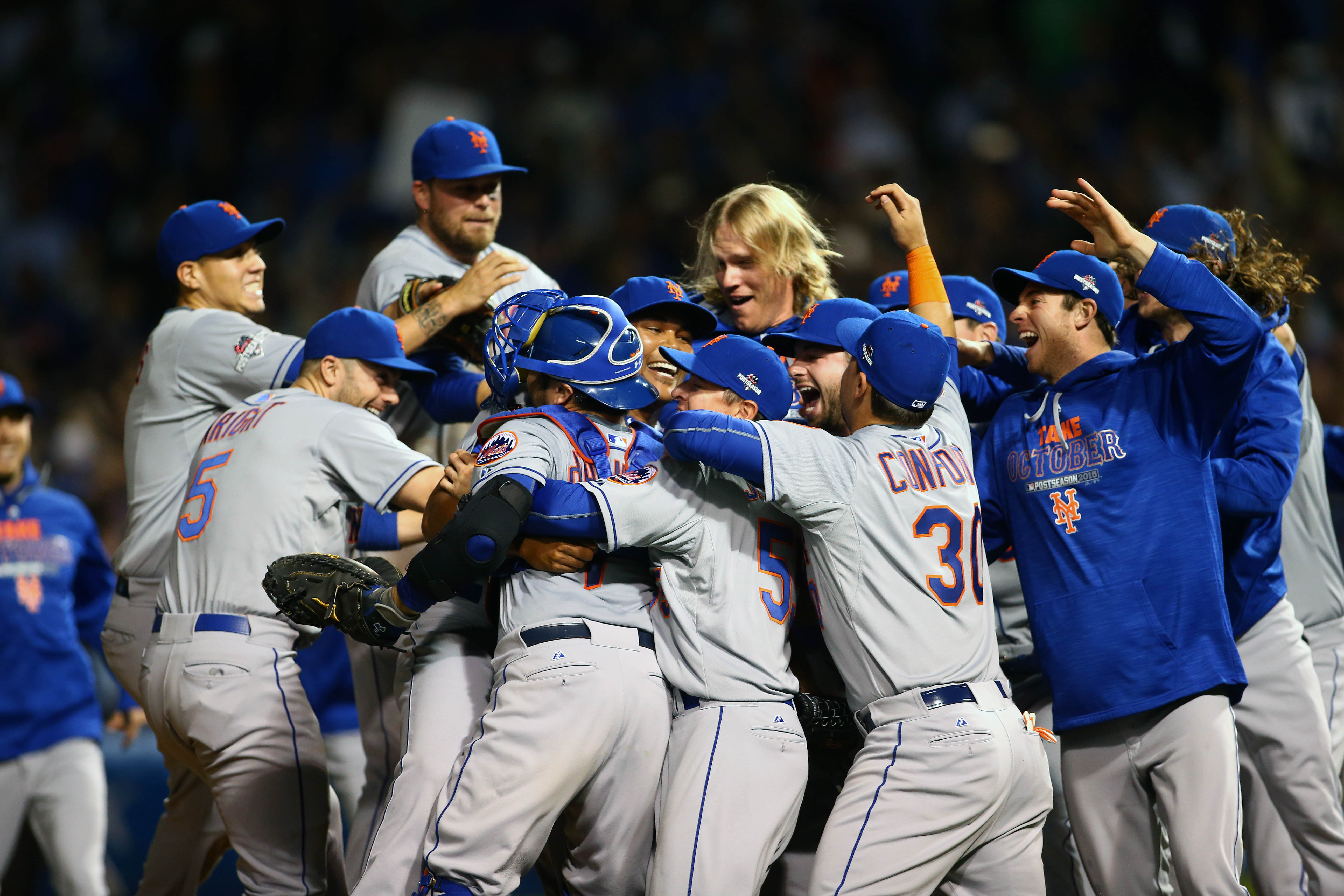 CHICAGO -- Daniel Murphy chased his son, Noah, up the third base line at Wrigley Field. Manager Terry Collins sprayed champagne on a small group of fans behind the visitor's dugout. David Wright soaked in the moment he had chased for so long.

A new generation of Amazins is heading to the World Series.

"I can't explain it. It's such a blessing to contribute to what we've been able to do," Murphy said.

Lucas Duda hit a three-run homer in the first inning and a two-run double in the second at Wrigley Field, silencing a crowd of 42,227 desperately hoping for the beginning of an epic comeback in Game 4.

Not this time. Not with New York's array of power pitchers, and Murphy swinging a hot bat that made him the NLCS Most Valuable Player.

The Mets never trailed against the Cubs and advanced to the World Series for the first time since they lost to the crosstown Yankees in five games in 2000.

They will play at either Toronto or Kansas City in Game 1 Tuesday night. . The Blue Jays trail in the American League Championship Series 3 games to 2, but beat the Royals 7-1 earlier Wednesday to send the series back to Kansas City for Game 6.

But the first big question for New York is the health of center fielder Yoenis Cespedes, who left in the second inning with soreness in his left shoulder. Any health issue for the slugger could be a big factor in the next round.

"Cespedes' shoulder is going to be OK," Collins said. "They didn't think there was any damage. They thought an injection would calm it down in a day, so he'll be ready."

The Cubs, meanwhile, still haven't won the crown since 1908. Manager Joe Maddon's wild-card bunch surged into this series, but was overmatched.

"They did not let us up for air at any point," Maddon said. "Their domination of the early part of the game and their pitching was impressive."

Nonetheless, writes CBSSports.com's Matt Snyder, it was "a wildly successful season for the now-rebuilt Cubs," who are loaded with young talent.

When Dexter Fowler looked at a called third strike for the final out, Jeurys Familia dropped to his knees in front of the mound and then hopped up for a hug from catcher Travis d'Arnaud. They were soon joined by the rest of their jubilant teammates in the infield grass.

By wrapping it up fast, the Mets can now set up their imposing rotation how they want for the World Series. Jacob deGrom, Matt Harvey and Noah Syndergaard will all be on full rest, and then some.

"This is a long time coming," Wright said. "We've been through some bad times. We've been through Septembers where you're just playing out the schedule and that's no fun. To be able to completely reverse that 180 and now celebrate and get a chance to go to the World Series, I wish I could bottle it all. I really do. That's an emotion I'll never forget."

Right when it looked as if his historic streak was coming to an end, Murphy connected for a two-run drive to center against Fernando Rodney in the eighth inning. The second baseman raised his right arm as he rounded first after his seventh homer of the playoffs - the string includes a shot in the deciding Game 5 of the Division Series at Dodger Stadium last week.

"Murphy, a man who hit just 14 homers in the entire regular season -- which was a career high, by the way -- has turned into freaking Babe Ruth," says CBSSports.com's Snyder.

Murphy, who was tied with Carlos Beltran for the postseason homer streak, finished with four hits and batted .529 (9 for 17) in the series.

D'Arnaud also homered as the Mets won their fifth pennant.

Bartolo Colon pitched 1 1-3 scoreless innings for his first playoff win since 2001, for Cleveland at Seattle. The 14 years, 12 days between postseason victories for the 42-year-old right-hander snapped the major league record of exactly 14 years for Milt Wilcox, according to STATS.

Colon, who made 31 starts this season, replaced rookie Steven Matz with two out in the fifth and runners on first and second. He struck out Kris Bryant swinging on a 3-2 pitch, preserving New York's 6-1 lead.

Bryant hit a two-run homer in the eighth, but it was way too late for Chicago in its first appearance in the NLCS in 12 years. The Cubs shut out Pittsburgh in the wild-card game and eliminated rival St. Louis in the division series, but were unable to mount much of a challenge against the Mets' talented pitching staff.

"I think we're in a place nobody expected us to be and we can be proud of that," Bryant said. "We were four wins away from going to the World Series. I think a lot of people didn't really expect us to be here."

The Cubs also loaded the bases with no outs in the fourth but only came away with one run, on Kyle Schwarber's grounder to first. Starlin Castro lined right to Wright at third on a hard smash for the first out.

While the Mets' pitching dominated much of the series, it was clear the Cubs were in trouble after aces Jon Lester and Jake Arrieta dropped the first two games in New York. Kyle Hendricks lasted just four innings on Tuesday night, and Jason Hammel was even worse in Game 4.

With two out and a runner on in the first, Hammel walked Cespedes before Duda hit a long drive to center for his first playoff homer. D'Arnaud followed with a shot to right for the Mets' second set of consecutive homers in playoff history, joining Darryl Strawberry and Kevin McReynolds in Game 4 of the 1988 NLCS against Los Angeles.

Hammel was replaced by Travis Wood after a one-out walk in the second, and Duda drove home two more runs with a double into the gap in right-center. Duda was just 3 for 24 in the playoffs coming into the night.