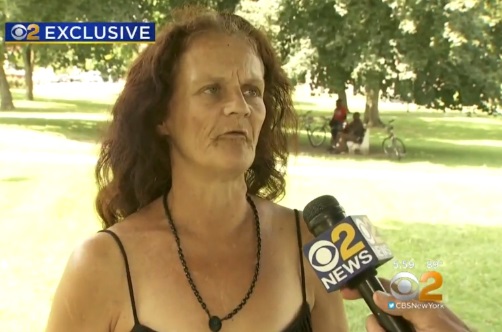 POUGHKEEPSIE, N.Y. -- A lightning strike in a Poughkeepsie, New York park last week left one person dead and four others injured. Now, one of the people who survived that strike is sharing her story.

As CBS New York reported, Karen Brooks was sitting in Mansion Square Park, when a large storm cell moved through the area and lightning struck around 4 p.m. Friday.

Brooks and her friends were sitting on a bench under a tree when the severe weather struck.

"My head felt like it was going to blow up," she said.

Brooks was just released from the hospital on Monday. She said the force of the lightning -- up to 1 billion volts according to the National Severe Storm Center -- threw her 20 feet, left burns on her legs and feet and set her purse in fire.

"That's what the lightning did to my pocketbook," she said as she displayed a tattered, charred purse.

One of her friends sitting on the bench, whom she calls Richie, was killed.

"He was completely purple in the face and he was not -- he wasn't going to make it. I knew that," Brooks said.

A person's chances of getting hit are one in 240,000, according to the National Weather Service. But on average, 49 people are killed by lightning in the U.S. every year.

"At the first sign of thunder, you should have a healthy respect for electricity and find shelter," said Dr. Gary Neifeld, who heads the emergency room at Vassar Brothers Medical Center in Poughkeepsie. "The electricity from the lightning bolt is very high voltage for a very short duration and can go directly through the heart and cause cardiac standstill, cardiac arrest."

Three victims were still hospitalized late Monday -- one in critical condition. Brooks said she very easily could not have made it if she had not gotten up to leave.

Experts said if you see lightning, you should never get under a tree. They said to find an open area and lie down flat on the ground.