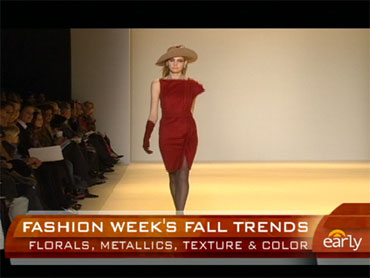 This week New York Fashion Week has been filled with some exciting new trends to look forward to this upcoming fall.

Katrina Szish, editor-in-chief of the fashion Web site Pink Memo, is checking out the new looks to help us get a head start.

Szish sat down with Early Show co-anchor Maggie Rodriguez to discuss what she calls "grown up back-to-school shopping."

"What were big themes you noticed this year?" Rodriguez asked.

"One of the first ones we saw was winter florals. Last fall everything was very dark and very somber," Szish said.

Florals are not just for spring, but will carry over to fall.

"That really shows designers are feeling more optimistic about the economy and sales and what will be happening in the retail sector," she said. "So there's just lots of fun pieces, whether it is a gown or a beautiful blouse or dress. You think florals and you think spring, but the colors they are a richer palette (which includes deep purples, greens, blues and cranberry.)"

"These aren't typical flashy disco metallics. These are more muted. Metallic threads are woven into the fabric. There's a sheen to it. It's not disco ball," she explained.

"Donna Karen celebrated her 25th anniversary and her first collection was called seven easy pieces. It was all black and simple. This was her update 25 years later of that seven easy pieces collection in the darker palette that we're seeing that she made it modern."

"It's about layering and texture. The crocodile leather layers of embellishment and beautiful layers of fabric worked together to create something that's touchable," she said.

According to Szish, texture was everywhere, in the form of densely layered fabrics; feathers topped with crystals and encrusted embellishments.

You don't have to be on a catwalk to wear these trends, Szish pointed out.

"Of course there's always lots of beautiful fall colors on the runway. The one that really resonated throughout was a deep rich red," she said. "It's a deep, beautiful red."

There were also red accents, like a scarf or gloves, or even a subtle evening gown with a simple red strap.

"It's interesting. People think fashion week is just about the clothes on the runway. It's also where the hair and makeup trends happen," Szish said. "The red trend has carried over to makeup -- red lips. We talked to our friends at Mac and they said there's even red eye shadow that we're seeing."