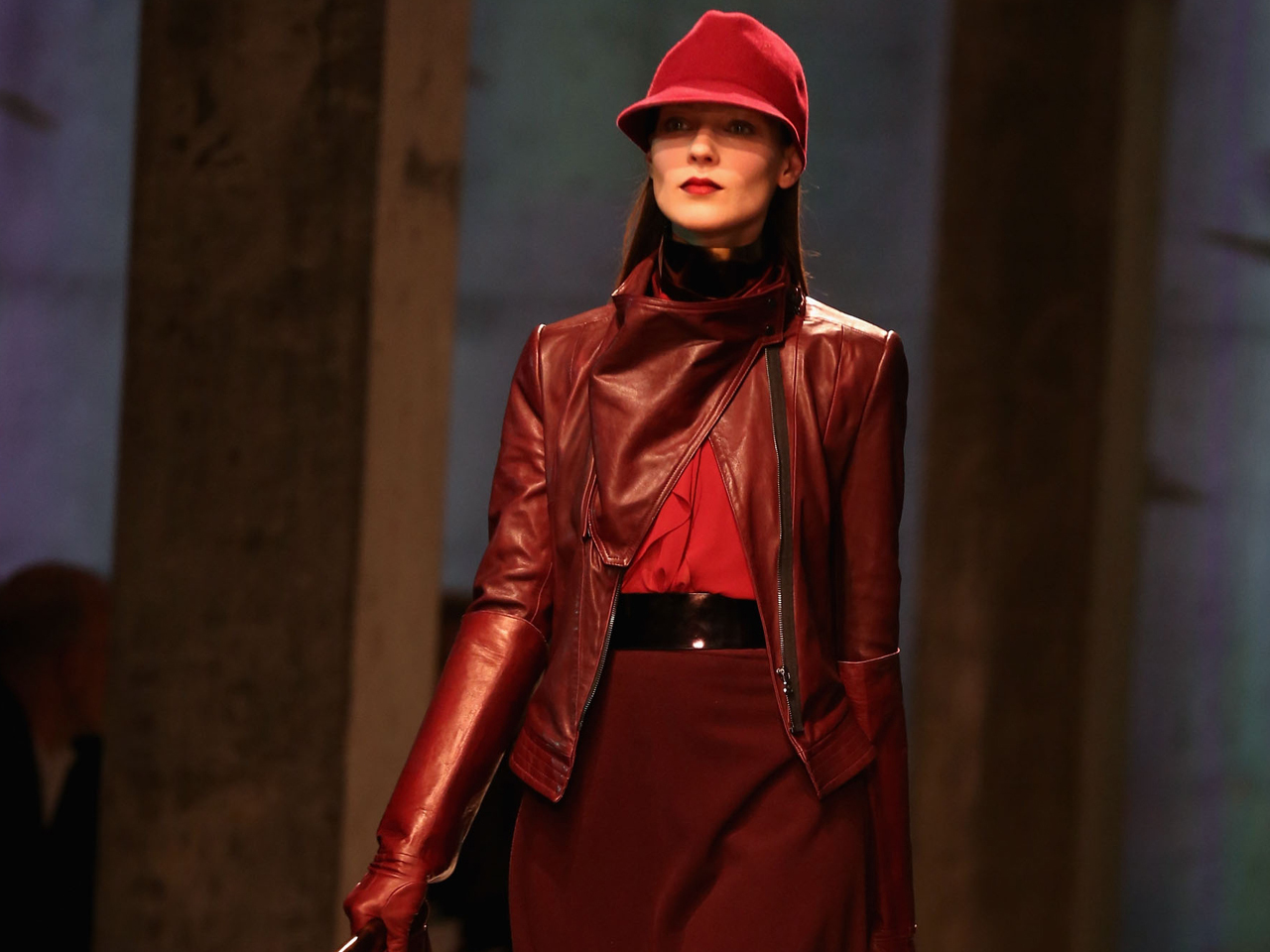 From delicate purple skirts to thigh-high boots in lizard, New York Fashion Week opened Thursday with an anything goes vibe for fall.

"The trend is freedom," said Max Azria, who sent embroidered tunics, fur outerwear and delicate lingerie-style underpinnings down his runway on the first of eight days of previews.

In addition to seasonal greens, berry tones and regal blues popped up on catwalks set up at Lincoln Center and around the city.

Tadashi Shoji was moved by an ice princess just right for a messy weather forecast of blizzard-like snow as Fashion Week headed into the weekend.

Shoji's muse was based on the notion of "exiled mobility" in looks that moved through the Russian Empire and the eventual fall of imperial rule. In shades of white and navy, she traveled from St. Petersburg in long, loose dresses with cascading backs and to Siberia and more peasant styles, including pouffy sleeves and pleated skirts.

For the Chicago-based designers behind Creatures of the Wind, there was a less intricate and more masculine look from seasons past with big, boxy jackets and a palette of black, brown, gray, navy and ivory. A splash of bright orange added color and a pattern of "broken geometry" a bit more interest.

Models on the runway of Kenneth Cole Productions were likely hoping to go home with his shearling coats, quilted puffer jackets and hearty boots. The show marked his return to the runway after a seven-year hiatus.

It's early in the designer previews for editors, stylists, retailers and bloggers, but there seems to be a utilitarian vibe emerging - maybe a commentary that shoppers want clothes that offer function combined with fashion.

More than 100 shows are planned through Feb. 14 at Mercedes-Benz Fashion Week drawing editors, retailers, stylists and bloggers. The hordes shift to London, Milan and Paris after that.

Azria and his design partner, wife Lubov Azria, were inspired by Istanbul's architecture and the Gypsies of southern Europe.

Printed boxy shift dresses were worn over fluid lingerie-like underpinnings. Long vests - both fur and cashmere - topped cozy crewnecks. There were more layers, with leather leggings or lizard thigh-high boots that appeared to peek out from the hemlines of dresses and sweaters.

"It sounds a little crazy, but it's also a little bit hippie. It's different than what we've been doing," Max Azria said backstage.

Why the change for fall from more structured styles the two went with for spring?

"My wife likes it all. She likes the colors, the prints, the textures. She likes to see a melange," he said.

Chai put on a little edge, but he kept his collection neat and trim.

He is among a few designers to include men and women on the same runway. Though they walked one by one, the crowd surely could envision couples: She in a metallic, military jacket and pencil skirt, he in a plaid suit.

Chai used emerald and the dustier, more botanical Linden greens that Pantone Inc., which provides color services to most of the fashion industry, put on its Top 10 list of the season.

The designer featured a lovely shade of light purple - a little unusual for fall - on a textured jacquard with a lacelike effect for a pencil skirt and matching peplum top. A man-tailored shirt underneath added a modernity and utility that Chai is developing as signatures.

"I have some of his clothes in my closet," she said. "I'm kind of a uniform girl. I wear jeans and tank tops a lot."

Shoji'js frosty muse was dressed in high-neck washed keyhole gowns decorated in lace, then made a quick change into a white neoprene capelet with navy metallic lace and a flouncy white-and-navy gown underneath.

Fabrics were heavy and embellishments rich.

Some of the looks seemed a little costumey, but the opulence worked for the black-tie show-stoppers and an ivory gown with a pearl-encrusted bodice that would be an out-of-the-box - and fabulous - choice for a super-luxe winter wedding.

CREATURES OF THE WIND

Their more masculine looks for fall also included a broad double-lapel jacket in black kidskin, ivory vinyl and olive wool worn over a black cotton and ivory vinyl shirt and a houndstooth plaid trouser in black and yellow.

A coat of navy and black wool and black vinyl was paired with a navy wool twill trouser.

A more feminine and pretty look came in a dress with a black kidskin top and a jacquard bottom in "broken geometry" of bright blue, green and olive.

The two designers have risen fast in the fashion world. Vogue editor Anna Wintour sat across the room from model-actress Dree Hemingway, Mariel's daughter and the great-granddaughter of Ernest Hemingway.

Gabier and Peters say one of their chief inspirations this season was the Memphis movement, an Italian design collaborative from the 1980s that specialized in colorful furniture, fabrics and other objects.

An opening video beamed on multiple walls in a vast Chelsea basement acknowledged that much has changed in the world since Cole last showed during Fashion Week - and how important social media is to the industry.

These days, it's more important that the audience "like" something rather than love it, Cole said.

Chances of both are pretty good. His collection, dubbed "Urban Liberation," offered a lot of mixed textures, from perforated leather to cozy knits (and a few futuristic metallic touches thrown in, in a classic autumnal palette of bottle green, burgundy, black and gray.

The prints were mostly cityscapes, one printed on the back yoke of a tunic top that was a pleasant surprise when the model rounded the corner of the catwalk.