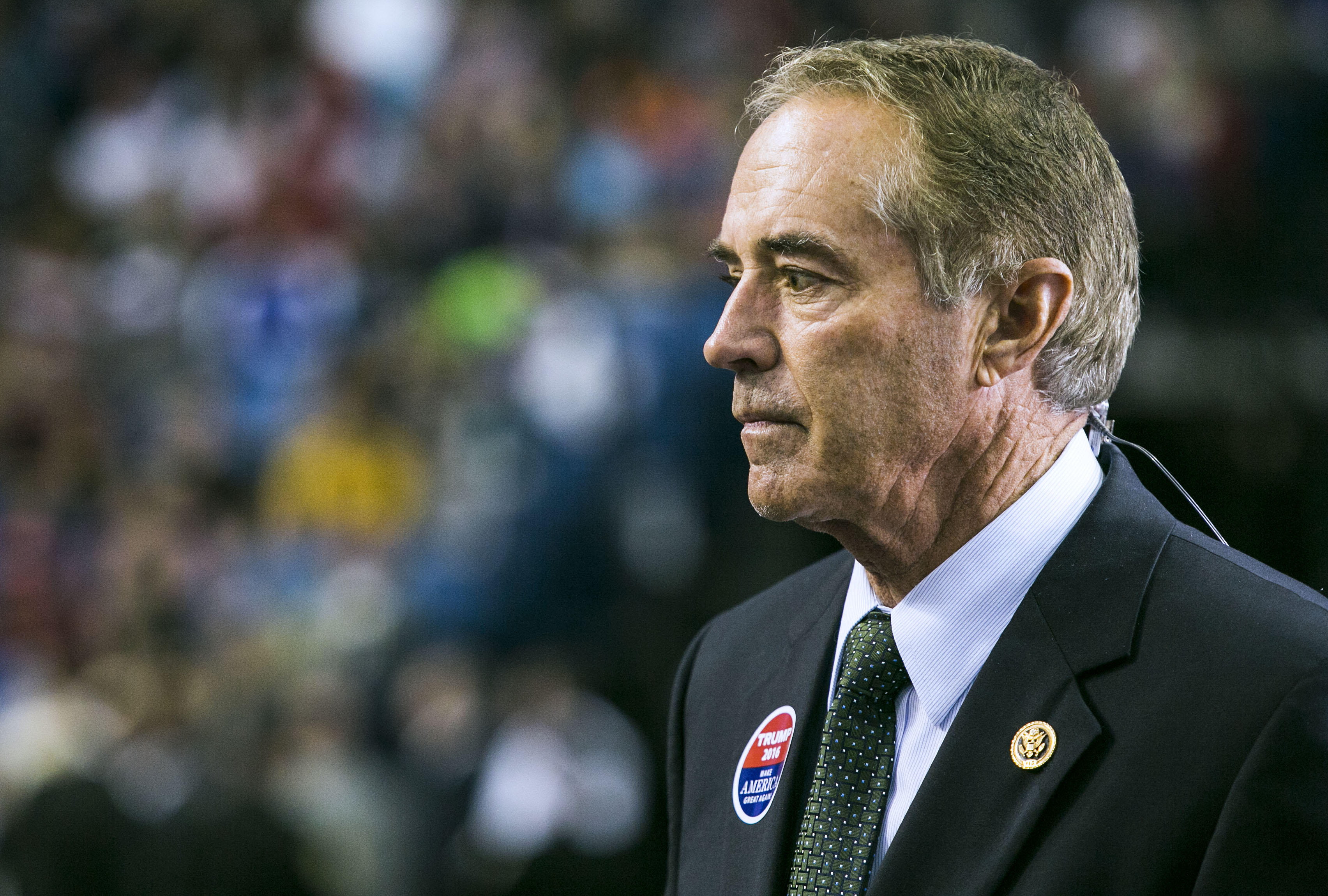 Republican Rep. Christopher Collins of New York, the first member of Congress to support President Trump during his campaign, has been charged with insider trading. He is accused of using inside information about a biotechnology company to help his son make illicit stock trades. The charges were announced, and the indictment was unsealed in New York City on Wednesday. The indictment charges Collins, the congressman's son and the father of his son's fiancee with conspiracy, wire fraud and other counts.

Collins and his co-defendants were arraigned in New York City this afternoon. They each pleaded not guilty and were released on a $500,000 bond. They are due back in court in October.

Geoffrey Berman, the U.S. attorney for the Southern District of New York, outlined the case against Collins at a press conference Wednesday. Berman was appointed interim U.S. attorney in January by Mr. Trump, and appointed as attorney by judges of the Federal District Court in Manhattan in April. He was formerly employed by Greenberg Traurig, the law firm where Rudy Giuliani, Mr. Trump's attorney, previously worked.

"He placed his family and friends above the public good," Berman said about Collins on Thursday. "Congressman Collins, who by virtue of his office helps to write the laws of our nation, acted as if the law did not apply to him."

The indictment of Collins comes a few months before the November midterm elections, when he will be facing Democrat Nathan McMurray. Berman denied that the upcoming election would affect the case against Collins. "Politics does not enter into our decision-making in charging a case," Berman told reporters. "We are months away from the election, and the concerns do not apply."

Collins, his son and his fiancee's father are additionally charged with lying to federal agents about allegations of insider trading. The Securities and Exchange Commission is also seeking to prohibit Collins from serving as a officer or director of a public company.

After the indictment was announced, House Speaker Paul Ryan, R-Wisconsin, removed Collins from the House Energy and Commerce Committee while the matter is pending.

"While his guilt or innocence is a question for the courts to settle, the allegations against Rep. Collins demand a prompt and thorough investigation by the House Ethics Committee," Ryan said in a statement. "Insider trading is a clear violation of the public trust. Until this matter is settled, Rep. Collins will no longer be serving on the House Energy and Commerce Committee."

According to the indictment, the defendants tried to get early word on the results of tests by a pharmaceutical company, Innate Immunotherapeutics Limited. The company developed a drug intended to treat Secondary Progressive Multiple Sclerosis.

Collins has denied any wrongdoing. "We will answer the charges filed against Congressman Collins in Court and will mount a vigorous defense to clear his good name," Collins' attorney said in a statement on Wednesday." "It is notable that even the government does not allege that Congressman Collins traded a single share of Innate Therapeutics stock. We are confident he will be completely vindicated and exonerated."

Collins was already being investigated by the House Ethics for his holdings in Innate and his promotion of the company. When the House Ethics Committee began investigating the stock trades a year ago, his spokeswoman called it a "partisan witch hunt."

Prosecutors say the charges relate to a scheme to gain insider information about a biotechnology company headquartered in Sydney, Australia, that has offices in Auckland, New Zealand. All three defendants were in federal custody Wednesday and were expected to make their initial court appearance in the afternoon.

Collins was a member of Innate's board of directors and held nearly 17 percent of the stock. When the drug trial's failure was announced, Innate's stock price plunged 92 percent.

But the New York lawmaker did not trade the millions of shares he owned before the drug trial's failure was made public, prosecutors noted, for two reasons. He was already under investigation by the House Ethics Committee, for one. But he also couldn't -- Collins' stock was held in the Australian stock exchange (ASX), and before the the drug trial's failure was announced, Innate asked the ASX to halt trading of the stock, which the ASX agreed to do, until June 27, 2017, after Innate's announcement that the drug trial had been a complete failure. This did not affect the U.S. over-the-counter market, however, where Collins' son's shares were held. Prosecutors allege that Collins passed along secrets to his son, Cameron Collins, in June 2017.

On June 22, 2017, Innate's CEO sent an email to the board of directors with the result of the trial. It was a "clinical failure" -- there were "no clinically meaningful or statistically significant differences in [outcomes]" between the drug and the placebo. "No doubt we will want to consider this extremely bad news," he concluded.

Collins, who was at the Congressional picnic at the White House when he received the mail, replied, "Wow. Makes no sense. How are these results even possible??" Within one minute of responding to the Innate CEO, Collins was calling his son repeatedly -- missing him six times before connecting with him on the seventh time -- to tell him, prosecutors say, that the drug had failed its trial, which was "material, nonpublic information...in breach of [Collins'] duties to Innate," the indictment reads.

Prosecutors say the son then traded on the insider information and passed it to a third defendant, Stephen Zarsky. They say Zarsky traded on it and tipped off at least three others.

Soon after the results of the drug trial were announced and the stock had crashed, prosecutors note that Collins' staff made a misleading statement about Cameron Collins' stock sales. "Cameron Collins has liquidated all his shares after the stock halt was lifted, suffering a substantial financial loss," the statement said. According to the indictment, Cameron Collins sold 1,391,500 shares of Innate between June 23, 2017 and June 26, 2017, when Innate publicly released the drug trial results.

Prosecutors say the the defendants avoided over $768,000 in losses by trading ahead of the public announcement of the failed drug trials.

The advocacy group Public Citizen filed a request for an investigation of Collins' stock dealings with the Office of Congressional Ethics and the Securities and Exchange Commission in January of 2017.

Collins was one of President Trump's earliest congressional supporters, becoming the first member of the House to endorse Mr. Trump for president during the 2016 campaign.

Cameron Collins' fiancee, Lauren Zarsky, and her mother, Dorothy Zarsky, settled charges. Lauren, an accountant, has also agreed to be suspended from appearing before the SEC as an accountant.