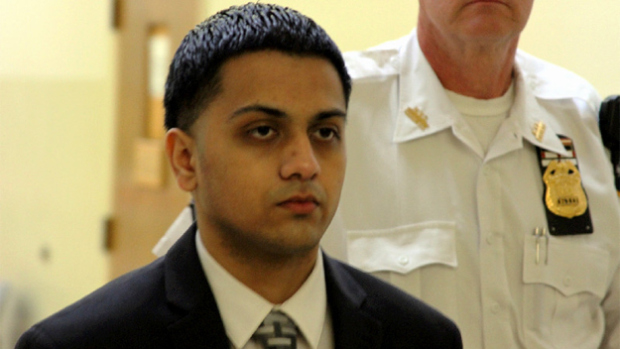 MINEOLA, N.Y. - A New York City teenager who admitted being high on marijuana and speeding when he slammed into a tree, splitting his new car in two on a suburban New York highway, was convicted Friday of four counts of vehicular manslaughter in the deaths of his friends.

A Nassau County jury returned a partial verdict against Joseph Beer, deadlocking on the top count of aggravated vehicular homicide - a ruling that Beer's attorney interpreted as jurors' failure to agree that marijuana contributed to his client's inability to maneuver on a winding stretch of highway.

"We never denied that there was some responsibility, but the point is, we always maintained, always maintained, that Joseph Beer was not impaired and the impairment by marijuana did not cause this accident," said attorney Todd Greenberg.

Jurors declined to speak with reporters as they left the courthouse.

Beer was 17 when, prosecutors say, he drove in excess of 100 mph on the Southern State Parkway on Long Island, smashing into a tree in October 2012. The crash happened on a stretch of highway dubbed Dead Man's Curve because of a treacherous hill that leads to a sharp curve in the highway.

The spectacular crash cut the high-performance Subaru in half, killing the four boys instantly; Beer was the lone survivor and had only minor injuries.

Besides the conviction on manslaughter, Beer, now a 19-year-old Queens college student, was convicted of reckless driving and reckless endangerment. He faces five to 15 years in prison on the vehicular manslaughter conviction.

He could have faced up to 25 years had he been convicted of vehicular homicide.

Nassau County Judge David Sullivan declared a mistrial on the vehicular homicide charge as well as manslaughter, driving while ability impaired by drugs, and driving without a license. District Attorney Kathleen Rice said no decision has been made on whether to retry Beer on those charges but that a decision would be made "in a short period of time."

Rice, who is running for Congress, insisted that "common sense" indicated the teenager was impaired.

"I would make what I think is a reasonable statement by saying anyone who smoked marijuana, the natural intent of that action is to impair oneself," Rice said at an impromptu news conference following the verdict.

Greenberg said he would ask the court to deem Beer a youthful offender because the crash happened when he was 17. If granted, Beer would face only four years in prison. Rice said her office would oppose that request.