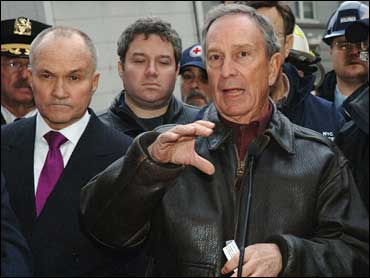 The city that was once America's murder capital, with a record 2,245 homicides in 1990, is now boasting an all time low of 461 homicides.

Mayor Michael Bloomberg and New York Police Commissioner Ray Kelly made the announcement Monday that the city is on track to post the lowest number of homicides since record keeping began in the 1960's.

Mayor Bloomberg said at a news conference following the graduation of a new police academy class that the city "is safer today than in any point in modern history."

Although overall crime is down 35 percent from 2001, when Bloomberg took office, he declined to take credit instead handing it to New York Police Commissioner Raymond Kelly, who he says used available statistical data to make changes that kept crime down.

Commissioner Kelly was also quick to give credit to New York's finest, citing solid police work as the main ingredient in the force's war on crime.

By example, he discussed a Monday incident in which two officers were patrolling the stairwells of a Coney Island housing project. They came upon men drinking, and one of the men drew a 9mm pistol. The officer, Oswaldo Estillo, grabbed the gun and dislodged the magazine, diffusing the situation without firing a weapon. The armed suspect was arrested.

Commissioner Kelly was also praised for his counterterrorism efforts. There have been several attempts in the years since the 9/11 attack, but none have been successful.

"We always assume the worst," Kelly said. "We are always trying to look over the horizon."

The 2010 academy class of 250 cadets is incredibly diverse. They speak 28 languages and are 40 percent white, 33 percent Hispanic, 15 percent black and 12 percent Asian.

Bloomberg initially canceled the January 2010 class as a cost cutting measure before economic stimulus dollars allowed the city to hire a smaller class of about 100 officers. Bloomberg has also reduced the number of overall officers.