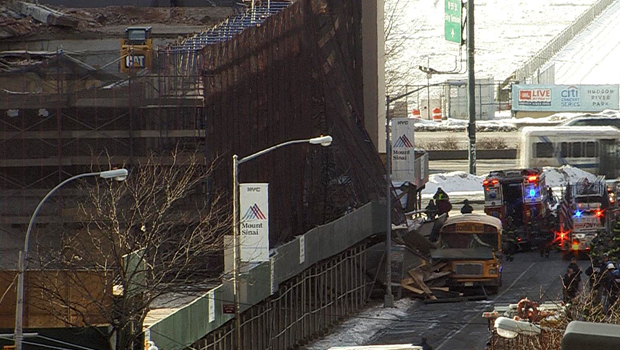 NEW YORK -- The outer shell of a midtown Manhattan building that was in the process of being demolished has partially collapsed, injuring at least one person.

Construction workers say the collapse Wednesday afternoon sounded like an explosion. Rubble from the building damaged a yellow school bus parked on the street. The police told CBS News that no children were on the bus and the bus driver was fine.

Workers digging inside the building around 2:30 p.m. when part of the structure came down, injuring one, according to officials.

"He actually was on the third floor, and when the floors pancaked down and collapsed, he rode the three stories down and walked out of the building. He was very lucky," Fire Chief Dan Donoghue said.

Firefighters are using drilling equipment to examine the wreckage.

Driver Dan Campbell said he was napping in the unoccupied bus when he woke up to see the building next to him crashing down on top of his bus. He climbed out the back door to safety.

"All I see is smoke and the stuff coming down, and I look and stuff was still coming down ... parts of the building."

Police say one person injured in the collapse on West 57th Street has been taken to a hospital in serious condition.

The city Buildings Department planned a news conference on the collapse later Wednesday.

The incident happened the day after a construction worker at the Barclays Center in Brooklyn was crushed to death when several steel beams fell on him.