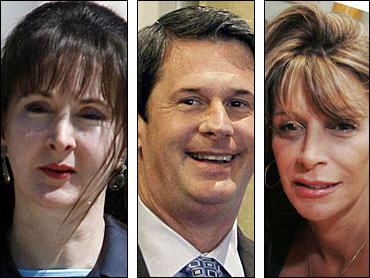 New allegations tie Sen. David Vitter to a high-priced brothel in his hometown, one day after he publicly apologized for his connection to an alleged prostitution ring in Washington, D.C.

On Monday, Vitter acknowledged being involved with the so-called D.C. Madam, hours after Hustler magazine told him his telephone number was among those she disclosed. A day later, new revelations linked him to a former madam in New Orleans and old allegations that he frequented a former prostitute resurfaced, further clouding his political future.

Jeanette Maier on Tuesday said Vitter was once a client of the Canal Street brothel. She pleaded guilty to running the operation in 2002. Vitter won his seat in the U.S. Senate in 2004.

Saying he was a "decent guy" who appeared to be in need of company when he visited the brothel, Maier added unexpected details to a scandal enveloping the first-term Republican.

"As far as the girls coming out after seeing David, all they had was nice things to say. It wasn't all about sex. In fact, he just wanted to have somebody listen to him, you know. And I said his wife must not be listening," Maier said in an interview with The Associated Press.

Maier, known for operating a high-end brothel with her mother and daughter, told the New Orleans Times Picayune she met Vitter at a fishing rodeo where she and her prostitutes were hired to entertain local politicians.

Maier told the Times Picayune he favored one prostitute named Wendy Cortez, though she was not sure if that was the woman's legal name. Many of the women use aliases with clients.

Vitter's office did not respond to calls for comment on the latest allegations.

Federal prosecutors unveiled the existence of the $300-an-hour brothel in April 2002. It was linked to similar operations in other U.S. cities.

"It wasn't all about dirty, raunchy, crazy sex," Maier told the AP. "It was a bunch of guys coming over hanging out with the girls and having a few cocktails, and men being men."

Maier was among 17 defendants who pleaded guilty in the investigation. With all the guilty pleas, there never was a trial, and that kept under wraps a list of customers that reportedly included prominent lawyers, doctors and business professionals.

Vinny Mosca, Maier's attorney in the brothel case, said in a statement late Tuesday that she never told him about Vitter being a client and that his name never came up in the case.

"Throughout the time that I represented Jeannette Maier in the Canal Street brothel case, the name of David Vitter or any code name for him never came up," Mosca said. "It was not contained in any evidence in the case, including in any book, list or document seized by the federal government or given to the federal government by Ms. Maier."

Mosca also said Vitter's name "was never picked up on any government wiretap nor is it listed in any transcript or court document as part of the Canal Street brothel case."

Maier told the Times Picayune she came forward to help Vitter, after seeing the one-dimensional representation of him in the wake of the D.C. Madam announcement.

"I want his wife to see what a wonderful man he is," she told the Times Picayune. "Men do things like this by peer pressure, by the good ole boys club.

"I want his kids to know he's a good father," she continued. "Just because he had sex out of wedlock -- so what? At least he stayed with his kids. How many men leave their children and wives and don't give a s**t what happens to them, and then their wives become prostitutes so they can feed their children?"

Also Tuesday, details resurfaced about an allegation that Vitter paid weekly visits to a prostitute in the French Quarter in the late 1990s. The allegations were investigated by a Republican rival when Vitter ran for a House seat in Congress in 1999. The seat had been vacated by Robert Livingston, who resigned after disclosure of marital indiscretions.

Vincent Bruno, a member of the state Republican Party's central committee, said Tuesday that he had confirmed the allegations at the time while working for the campaign of David Treen, a former Louisiana governor running against Vitter.

The allegations never surfaced in the congressional campaign, but The Louisiana Weekly, a New Orleans newspaper, wrote about them in 2002 and 2004. Vitter denied the accusations. The prostitute never spoke publicly about the alleged affair, which was largely ignored by mainstream news organizations.

"She said she was having a paid affair often on Tuesdays and Thursdays at Dauphine and Dumaine," Bruno said, referring to two French Quarter streets.

"It's very sleazy, and it's illegal. But, OK, it doesn't apply to senators. They're an elite group," Bruno said with irony. He has called on Vitter to resign.

Bernie Pinsonat, a Louisiana political analyst, said Republicans most likely would stand behind Vitter despite the new allegations.

"They aren't going to throw him to the wolves," he said, citing support from religious organizations, conservative commentators and the general public.

Vitter declined interview requests throughout the day Tuesday, and made no public appearances in the Capitol. The night before, he'd made a startling confession about his connection to the so-called D.C. Madam in an e-mail to The Associated Press:

"This was a very serious sin in my past for which I am, of course, completely responsible. Several years ago, I asked for and received forgiveness from God and my wife in confession and marriage counseling."

Vitter's statement said his telephone number was on phone records of Pamela Martin and Associates, an escort service, before he ran for the Senate in 2004. Federal prosecutors have accused Deborah Jeane Palfrey of racketeering by running a prostitution ring that netted more than $2 million over 13 years, beginning in 1993. She contends that her escort service was a legitimate business offering sexual fantasies.

Palfrey's lawyer, Montgomery Blair Sibley, said in an interview that the call from Vitter's number to the escort service was made Feb. 27, 2001.

Vitter, a Harvard University graduate and Rhodes scholar, spent six years in the House — beginning in January 1999 — before being elected to the Senate.

In June, Flynt took out an ad in The Washington Post offering $1 million to anyone who could show he or she had engaged in a sexual encounter with a member of Congress "or a high-ranking government official." In a statement Tuesday, Hustler said Vitter's statement was "the result of a multi-pronged investigation launched and run by Larry Flynt."

Vitter, 46, and his wife, Wendy, live in the New Orleans suburb of Metairie with their four children.