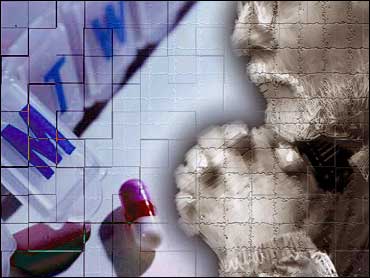 A new study in Tuesday morning's Archives of Neurology looked at Alzheimer's disease in almost 5,000 people age 65 or older in Utah. Those who took vitamins were compared to those who didn't.

Medical Correspondent Dr. Emily Senay reports the study found a combination of vitamin E and C supplements reduced the incidence of Alzheimer's disease by about 64 percent. There was no benefit from the use of vitamin C alone, vitamin E alone, or multivitamins alone.

The findings suggest that vitamins E and C may offer protection against Alzheimer's when taken together in the higher doses available from individual supplements.

In the study, vitamin E use was categorized as more than 400 international units of vitamin E. Vitamin C use was defined as at least 500 micrograms of ascorbic acid. But there may also be some benefit when a vitamin E supplement is combined with the lower doses of vitamin C found in multivitamins.

Alzheimer's is a progressive disease that gradually destroys brain cells. Comparing two scans of a healthy and a diseased brain, the brighter colors indicate more cell metabolism. The theory is that vitamins E and C may help protect against damage caused by free radicals, the by-products of metabolism that can damage cells. Some believe free radicals may contribute to the development of Alzheimer's, because cells in the brain are especially sensitive to their damaging effects.

Jessica Alba's 'Into The Blue'

Further study is needed to confirm the benefits before any official recommendations can be made, but the researchers say the results are extremely exciting.

The threat from Alzheimer's disease is thought to be growing as people live longer in general. Since antioxidant vitamin supplements are relatively safe, cheap and are thought to have other wide-ranging health benefits, the hope is they could turn out to be an ideal Alzheimer's prevention strategy for the aging population.