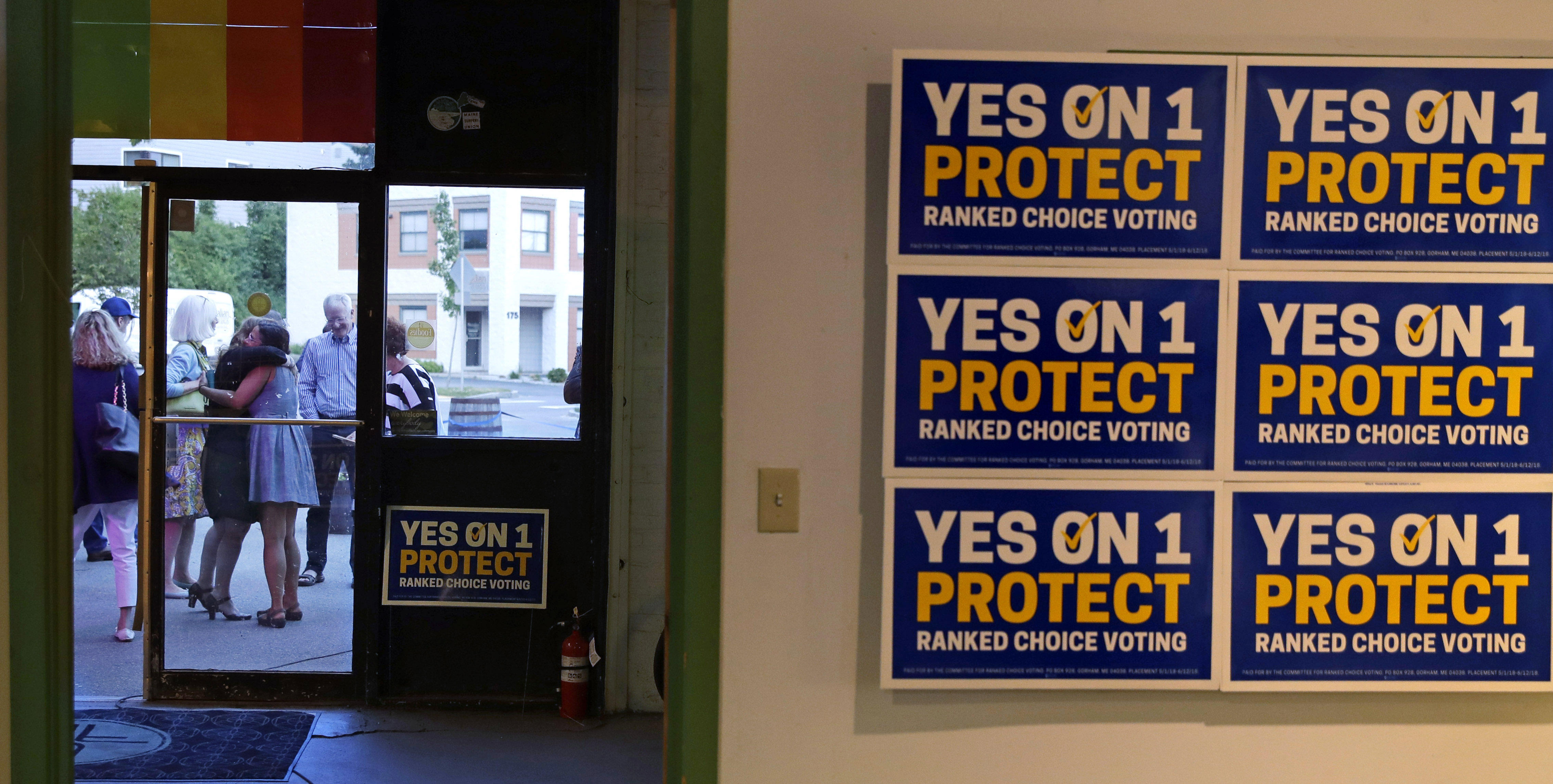 The election drew to a close last week in most places but not in fishing villages, potato farms and vast tracts of wilderness that comprise Maine's 2nd Congressional District.

The four-way political battle won't conclude until a computer algorithm has the final say this week on whether Republican Rep. Bruce Poliquin wins re-election or is ousted by Democratic state lawmaker Jared Golden.

The new way of voting in which all candidates are ranked on a ballot made its national debut in U.S. House and Senate races in Maine.

Under the system, a candidate wins with a majority of first-place votes. If there's no majority, the last-place candidate's second-place votes are reallocated to remaining candidates. The computerized process can be repeated until there's a winner.

Across the country, voting reform advocates are watching as the system faces its biggest test in the most expensive race in Maine history.

"This will either fuel the adoption of ranked-choice voting in other jurisdictions, or it will stop it in its tracks," said Corey Cook, dean of the School of Public Service at Boise State University, who has studied 100 elections that used the system.

Maine residents approved the system in 2016 after nine of the previous 11 gubernatorial elections resulted in winners who failed to get a majority of the vote.

Proponents say the system allows people to vote for third-party or independent candidates without concern for political "spoilers" or vote-splitting. They say it also moderates campaigns because candidates don't want to alienate supporters of other candidates in the event they need second-place votes to reach a majority.

Critics say the ballot and system can be confusing to voters. They also say bland campaigns don't allow candidates to differentiate themselves.

The system is sometimes referred to as an "instant runoff" in the dozen or so municipalities where it's used. But there's nothing instant about the process in Maine. All of the ballots, more than 600,000 of them, had to be shipped to Augusta and scanned into a computer. That process continued on Monday.

In Maine, Poliquin had an edge Tuesday night of about 2,000 first-round votes over Golden but fell far short of reaching the 50 percent threshold. That means the outcome will hinge upon second-choice votes from more than 20,000 supporters of two independents who together collected about 8 percent of the vote.

If it works as intended, then it's possible the Republican incumbent with the most first-place votes could end up losing to a Democrat.

Some expect a lawsuit to challenge the one-person, one-vote rule under the theory that the system lets the supporter of a last-place candidate to effectively vote twice, violating the Equal Protection Clause.

The Maine GOP and Poliquin already have complained about unlocked ballot boxes and other irregularities, furthering speculation of a legal challenge. Poliquin has declined to say if he'll sue if he loses the ranked-choice election. Golden also declined to comment on the voting process.

Several courts, including the 9th Circuit Court of Appeals in San Francisco, have upheld the constitutionality of ranked-choice voting, he said.

Even though legal precedents favor ranked-choice voting in federal elections in Maine, a lawsuit is certainly possible given the high stakes, said James Monteleone, attorney for the Committee for Ranked Choice Voting in Maine.

"When political candidates find themselves in a difficult situation, creative lawyers come up with creative ideas," he said.

If there is a lawsuit, it would likely be in federal court in Maine, said Jim Burke, a professor from the University of Maine School of Law.

For now, the voting system is used only in federal races and in statewide primary elections in Maine. It cannot be used in the governor's race or legislative races because of concerns it runs afoul of the Maine Constitution.

Democratic Gov.-elect Janet Mills said she intends to press for an amendment to the Maine Constitution so the system can be used in all elections. That would require a two-thirds vote of the Maine Legislature and another statewide vote.