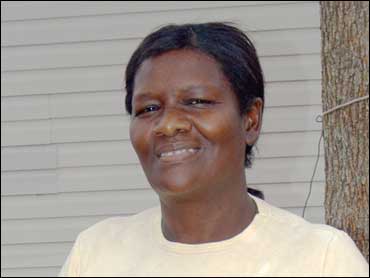 A 59-year-old great-grandmother living in south Georgia is set to give birth to twins next month, which would steal some of the limelight, and a purported record, from a 56-year-old New York City woman who gave birth to twins this week.

Frances Harris of rural Sylvester, Ga., says she wasn't trying to get pregnant. She didn't even know she was carrying a child - let alone two- until she visited a doctor in August while trying to figure out some unusual weight gain over the summer.

"A lot of things changed about me," said Harris, a homemaker whose twins are due Dec. 21. "I started craving grapes and apples, things I don't usually crave. By then I was four months' pregnant."

When the doctor broke the news, "They had to sit me down. I couldn't even talk," Harris said during an interview Thursday in her tidy mobile home, nestled between cotton fields, a pond and a highway.

For this mother of five, grandmother of 14 and great-grandmother of six, the news of her pregnancy was even more shocking considering she had her tubes tied after the birth of her last child - 33 years ago.

"They came untied," she said, matter-of-factly.

Harris had her first child when she was only 15 years old, which means 44 years will separate her oldest from her youngest.

"At first I was a little upset. I was thinking I'm not the baby anymore, but it's fine. I know I'm probably going to be the one who helps her care for them," said Harris' youngest, Kendra Jackson, who works at a dry-cleaning business in Sylvester.

The twins' father, Raymond Harris, is a 60-year-old heavy equipment operator, who was equally shocked to learn of the pregnancy. He was busy working and was unreachable Thursday.

The couple divorced years ago but plan to get married before the twins are born, Frances Harris said. She plans to care for the twins herself, with the help of her children and the babies' father.

The oldest American believed to have given birth to twins is Aleta St. James, a single mother who turns 57 on Friday. She gave birth Tuesday at New York's Mount Sinai Medical Center.

"It all feels right. I feel like everything is in harmony. My babies are very calm and peaceful too," said St. James from her hospital room Thursday, resting her infants on her chest as she sung and spoke softly to them.

St. James, a motivational counselor from New York who helped her brother Curtis Sliwa found the crime-fighting Guardian Angels in the 1970s, gave birth following in vitro fertilization. The twins - a girl named Francesca and boy named Gian - were born by Caesarean section.

St. James hopes having a child later in life will be an inspiration to others. "It doesn't have to be having babies, it could be getting remarried or out of a relationship, or to create something," she said.

The single mother said two cribs arrived Thursday at her apartment, where her friends are busy preparing for the homecoming, scheduled for Saturday. She plans to have a nurse to help for the first few months. Friends and family also have signed up to pitch in with various duties.

The latest statistics available from the U.S. Centers for Disease Control and Prevention show that 263 children were born to women between age 50 and 54 in 2002. The oldest American to give birth is Arceli Keh, of California, who had a daughter in 1996 when she was 63.

As Harris flipped through photo albums with pictures of her children, grandchildren and great-grandchildren Thursday, she said she's sure she's carrying twins - a boy and a girl. "I took four ultrasounds to make sure."

She said her blood pressure and cholesterol are a little high, but otherwise she's fine. For exercise, she walks a mile down a country road to and from her church. The delivery is planned for a hospital in either Macon, 100 miles north, or Atlanta, 180 miles north.

Harris said some family members, concerned about health complications for older women who give birth, had suggested she end the pregnancy. But she is not comfortable with abortion.

"I couldn't live with myself," she said as an evangelist preached on a television in her living room. "I pray we all three pull through. I'd rather they take my life than the babies. When they're so little, they're so beautiful. I think they are God's gift."

Her 15-year-old granddaughter, Kiara Steele, said she isn't too happy about all the attention.

"I was really embarrassed because that's my grandma - and she's pregnant," she said.