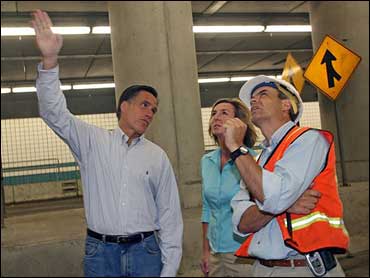 Gov. Mitt Romney on Monday dramatically raised the number of potential trouble spots identified by engineers and investigators in a Big Dig connector tunnel where the ceiling collapsed.

Romney, speaking at a Statehouse news conference and illustrating his points with charts and diagrams, said that tests show more than 1,100 bolt assemblies that used epoxy and more than 300 other areas in the tunnel are unreliable. All, he said, will have to be reinforced.

"In grabbing ahold of these bolts and pulling on them with excess force, they're letting go ... at lower pressures than they were designed to handle," Romney said.

"That suggests that this epoxy system is not working ... and for that reason we can't count on it," he said.

Last week, days after 12 tons of ceiling panels came loose and fell on a car, crushing a passenger, the governor announced that inspections had found at least 242 points where bolts were separating from the tunnel roof.

Two Big Dig tunnels have since been closed and Romney has not yet cleared the way for them to reopen.

The $14.6 billion Big Dig — the most expensive highway project in U.S. history — buried a highway network that used to slice through the city, replacing it with a series of tunnels.

The project also has also been plagued by leaks, falling debris, cost overruns, delays and problems linked to faulty construction.

Attorney General Tom Reilly, who is considering filing involuntary manslaughter charges in the ceiling collapse, said Monday that investigators had discovered documents showing there was a "substantial dispute" from 1999 to 2000 over whether the design of the tunnel was adequate to hold the weight of the 3-ton ceiling panels.

Reilly, who refused to give specifics, said he did not know how the dispute was resolved. He said the tunnel designer, the contractor and the company overseeing the Big Dig project were involved but would not say who raised the questions.

The contractor on the tunnel, Modern Continental Construction Co., issued a statement saying it was cooperating with the investigation and is "confident that our work fully complied with the plans and specifications provided by the Central Artery Tunnel Project."

Commuters on Monday endured increased traffic hassles with the closing of a second tunnel ramp connecting two interstates. It was closed Sunday after testing showed dozens of problems with the bolts holding up the ceiling. That ramp had been used as part of a detour around the accident scene.

Romney said engineers successfully tested a system to reinforce the bolts. With crews working around the clock, at least one portion of the closed areas could reopen by late in the weekend, he said.

Romney met earlier in the day with congressional, state and city leaders to outline his plan for traffic and to ensure the safe reopening of the tunnels. After the meeting, Sens. John Kerry and Edward M. Kennedy endorsed the governor's plans.

Kennedy said congressional committees are making plans to hold hearings into the tunnel collapse and the Big Dig project.

"We want to make sure the issue of safety is front and center," Kennedy said.