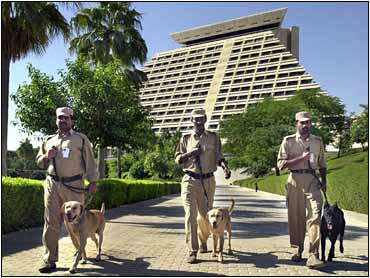 Ministers from more than 140 countries agreed Wednesday to launch a broad series of trade liberalization talks many hope will give a healthy injection of vigor into the global economy.

After six days of haggling at a World Trade Organization meeting in the Gulf state of Qatar, ministers agreed to begin talks next year on reducing farm export subsidies, lowering or eliminate more industrial tariffs and reviewing problems faced by developing countries from previous pacts.

Qatari Finance and Trade Minister Youssef Kamal, the chairman of the conference, brought down his gavel to signify unanimous agreement on the declaration setting up a round.

Many countries believed that a new round of talks was necessary to stimulate economic growth through freer trade.

"Today the members of the World Trade Organization have sent a powerful signal to the world. We have removed the stain of Seattle," where two years ago delegates failed to set an agenda for talks, U.S. Trade Representative Robert Zoellick, who led the U.S. delegation, said.

"By agreeing to launch new global trade negotiations, we are helping to deliver growth, development and prosperity throughout the world. We are also providing a sign of hope — the hope of economic opportunity and the hope of political purpose by almost 150 nations," he added.

Differences between developing and rich nations had prevented the Seattle gathering from reaching an agreement on opening a new round of talks to lower trade barriers. A new round would likely last for years.

After six days of hard bargaining, trade ministers approved a deal many hope will send a shot of confidence into the flagging global economy — and restore credibility to an organization traumatized by its failure in Seattle two years ago.

India had refused to budge on issues key to developing countries, including a demand that rich countries — mainly the United States and Canada — agree to quicker reductions in limits on textile imports. Diplomats said India dropped the demand with the understanding that the issue would be discussed in one of the WTO committees.

Other issues for India include the environment, investment rules, competition codes, government procurement guidelines, and common standards for customs procedures.

But the last-minute move was consistent with India's hard stance at the talks, where it has championed an array of developing world issues.

India was particularly upset by revised proposals on the environment, seeing them as a back door attempt by the European Union to block exports from countries that do not meet Western standards in areas such as food safety, diplomats said.

It had also dug in its heels over demands for greater market access for textiles from poor countries, the export lifeblood of developing nations on the Indian subcontinent and elsewhere.

Ultimately, however, it agreed not to object to adoption of the main declaration, which set out an agenda for a neround of talks, said Sergio Marchi, Canada's ambassador to the WTO. Its strong objections would be noted in a separate statement, he said.

India agreed to other declarations — including ones to ensure poor countries can get access to expensive Western drugs and to speed up implementation of past trade agreements, said Marchi.

Many developing countries say they have yet to benefit from earlier WTO deals, which they contend benefit the richer nations.

Delegates had earlier cleared an important hurdle when the European Union agreed to endorse the WTO's new round after a compromise had been found to meet France's demands not to be committed to ending farm export subsidies.