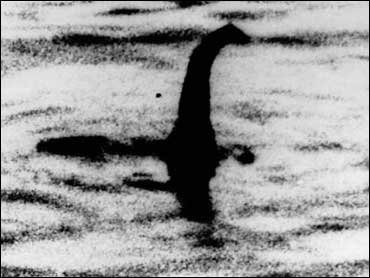 Proving or disproving the existence of the "Loch Ness monster" has been one of Britain's more popular undertakings for decades.

Tales of the "monster" have drawn believers and skeptics alike to the shores of a Scottish lake, all looking for definitive word, one way or another, to explain the mysterious monster sightings.

The latest theory has it that Nessie was or is really — Jumbo.

"The reason why we see elephants in Loch Ness," asserts Dr. Neil Clark, a paleontologist, "is that circuses used to go along the road to Inverness and have a little rest at the side of the loch, and allow the animals to go and have a little swim around."

The above-water parts of a swimming elephant, Palmer says, might look from a distance like Nessie's most famous profile.

But it wouldn't explain some other things, such as a 1960s film of an unidentified speeding object.

And it wouldn't convince the hundreds of people who believe they have seen a sea monster far out in the Loch.

On the other hand, kids Palmer, it could give rise to a whole new line in souvenirs.

How to Get Most Financial Aid for College
View CBS News In
CBS News App Open
Chrome Safari Continue
Be the first to know
Get browser notifications for breaking news, live events, and exclusive reporting.