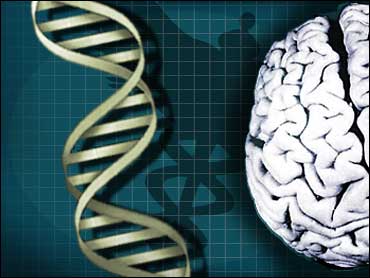 A new test may help scientists answer a perplexing "which came first" question about the development of Alzheimer's disease, possibly pointing the way to earlier diagnosis or even treatment.

Brain deposits of a small protein known as amyloid beta long have been associated with Alzheimer's. But scientists have been unable to determine whether the body begins producing too much of the protein or loses the ability to clear it away.

Now, a research team led by Dr. Randall J. Bateman at Washington University in St. Louis is poised to find that answer with a test that for the first time can monitor the protein.

An initial test of the new technique on six healthy volunteers determined that the protein is quickly produced and quickly cleared, keeping it in balance in the central nervous system, the researchers report in Monday's online issue of the journal Nature Medicine.

Indeed, it turned out that the protein, also known as Abeta, is produced faster than any other measured before, Bateman said in a statement.

That was unexpected. Because the brain-wasting disease takes so long to develop, many experts had assumed that the production rate for the protein was very slow.

Bateman is now turning to people with Alzheimer's in an effort to determine whether increased production or decreased clearance of Abeta is a source of the disease.

"The paper describes an extremely interesting and potentially important advance," said Dr. Samuel Gandy of Thomas Jefferson University in Philadelphia said. "This method is light-years ahead of any existing technology for approaching the issue," said Gandy, who was not part of the research team.

He said the challenge now is finding clues to the developing disease before symptoms begin to appear. For now, Gandy said, the new test "is much more likely to be useful as a research tool than as a clinical diagnostic test."

Nonetheless, Bateman said it could be useful in Alzheimer's studies. Reseachers could "directly monitor patients in clinical trials to see if the drug is really doing what we want it to do in terms of Abeta metabolism," he said.

"If further study confirms the validity of our test, it could be very valuable for determining which drugs go forward in clinical trials and at what doses," he said in the statement.

Currently, determining whether any new Alzheimer's drug works requires researchers to follow the mental progress of patients for months or years.

Bateman said he hopes the test "can develop ways to identify potential Alzheimer's patients" by examining Abeta production and clearance in the body.

In the test, a patient is given an intravenous drip that includes an amino acid, leucine, that has been modified to contain carbon atoms with 13 neutrons and protons instead of the usual 12.

Researchers monitor the fluid surrounding the brain and spinal cord to track the amount of carbon-13 leucine and determine the Abeta production rate.

Once the amount of carbon-13 leucine reaches a plateau, they stop the intravenous drip and measure how long it takes the body to clear away the labeled leucine.

In the first test the procedure lasted for 36 hours.

The research was funded by the American Academy of Neurology Foundation, National Institutes of Health and the Alan A. and Edith L. Wolff Charitable Trust.