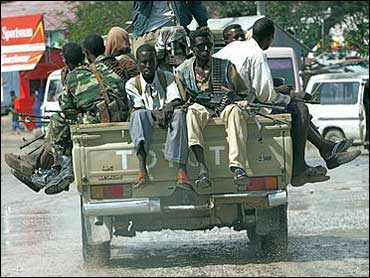 A fundamentalist Muslim who is listed by the U.S. State Department as a suspected al Qaeda collaborator was named Saturday as the new leader of an Islamic militia that has seized control of Somalia's capital.

The militia said in a statement it had appointed Sheikh Hassan Dahir Aweys, who the Bush administration says was an associate of Osama bin Laden in the early 1990s. The U.S. has long feared that this chaotic nation will become a staging ground for terrorist attacks much like Afghanistan did in the 1990s.

And in yet another sign that radical Islam is taking hold in a country where most practice a moderate brand of Islam, the group changed its name Saturday from the Islamic Courts Union to the Conservative Council of Islamic Courts.

Aweys replaces Sheikh Sharif Sheikh Ahmed, who is moderate in comparison. Since the militia drove widely despised secular warlords out of Mogadishu and much of southern Somalia earlier this month, Ahmed has softened his rhetoric calling for strict Islamic, or sharia, law.

He also agreed to recognize the largely powerless interim government which is based in Baidoa, 90 miles from of Mogadishu, because the capital is so violent. Aweys has condemned that government and any attempts to install a Western-style democracy.

On Friday, a Swedish journalist covering a rally in Mogadishu to celebrate the deal with the interim government was killed by a single gunshot to his back. The assailant has not been caught, but the militia said the killing was planned by a foreign enemy that wants to shatter weeks of relative peace since the Islamic militia took over.

Aweys, a cleric believed to be in his 60s, has strenuously advocated for a strict Islamic government to end 15 years of anarchy in Somalia. In 1991, warlords drove out dictator Mohammed Siad Barre and turned on each other, turning the country into a patchwork of rival fiefdoms.

After the Sept. 11 attacks, the United States released a list of individuals and organizations accused of having ties to terrorism. Aweys and a conservative Somali group he founded called al-Itihaad al-Islaami were featured for their alleged links to bin Laden while he was living in Sudan in the early 1990s.

Aweys has told the AP in past interviews that al-Itihaad no longer exists and he has no ties to al Qaeda. He went into hiding following the Sept. 11 attacks and only re-emerged in August 2005, when he helped establish the Islamic Courts Union.

Anger at foreigners runs high Mogadishu, which is awash in weapons after so many years of anarchy. Anti-foreigner sentiment has been stoked by reports that the warlords defeated by the Islamic leaders this month had been secretly financed by the CIA.

U.S. officials have accused the Islamists of harboring al Qaeda leaders responsible for the deadly 1998 bombings of U.S. embassies in Kenya and Tanzania.

The death of the Swedish journalist, 47-year-old Martin Adler, was a blow to the militia's pledge to pacify Mogadishu. Earlier this month, Islamic leaders invited international news media, including The Associated Press, to meet with the group's chairman and see what they have accomplished in terms of restoring law and order to Mogadishu.

The group provided security and nobody was injured during that trip. But Adler's death highlights just how difficult it will be to tame this city.

Mogadishu resident Madina Hussein, a mother of four, said she hopes the killing won't prompt international leaders to turn their backs on Somalia.

"We need the assistance of the international community. We are tired of the continuous violence and fighting. There is no reason to kill foreigners who came here to show the world what is going on," she said.

At least 13 other journalists have been killed in Somalia since 1991, according to the Committee to Protect Journalists. In February 2005, British Broadcasting Corp. Africa producer Kate Peyton was fatally shot in Mogadishu.
SALAD DUHUL