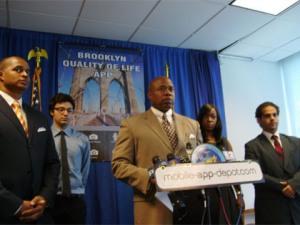 Adams' "Brooklyn Quality of Life" application allows users to email photos or recorded messages with their iPhones and Android smartphones. The anonymous emails go to a group of retired detectives who decide whether the content should be posted on a Facebook page accessible only to members of city agencies.

Adams likened the app to having a community watch group right on your cell phone. He said it is not meant to be a replacement for 911, but rather an outlet for the "many people who are afraid or intimidated," by police.