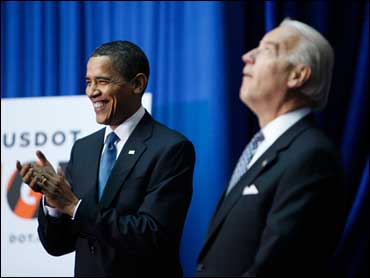 (AP)
A week after telling the nation that "nobody messes with Joe," President Obama bestowed yet another title on Vice President Biden to describe his role as a zealous overseer of the $787-billion economic stimulus plan.

"To you - he's Mr. Vice President, but around the White House we call him 'the Sheriff'- because if you're misusing taxpayer money, you'll have to answer to him."

Addressing employees at the Department of Transportation with Biden at his side, President Obama went on to say he wants all of us to be part of Biden's posse.

"I'm deputizing every single American to visit a new website called 'recovery.gov,' so you can see where your tax dollars are going and hold us accountable for results."

It's clear the White House is calling on the nation to saddle up for stimulus – in the hope it will slow and reverse the recession.

Biden is modest about his role in all this. He got a standing ovation as he began his remarks, but responded in an "aw shucks" manner by telling the audience "you need not stand for me."

Move over "Smokey and the Bandit," here come "Obama and the Sheriff."

(CBS)
Mark Knoller is a CBS News White House correspondent. You can read more of his posts in Hotsheet here.
View CBS News In