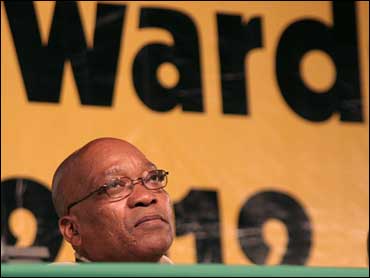 South Africa's top prosecutor said Thursday he had enough evidence to bring corruption charges against Jacob Zuma, the man in line to be the country's next president.

Zuma responded: "If I have a case to answer, then take me to court."

Mokotedi Mpshe told The Associated Press that prosecutors would announce in the new year the next step in their investigation into the allegations against Zuma, who was elected leader of the African National Congress on Tuesday.

"The type of evidence we have so far can be taken to court," said Mpshe, who is investigating allegations that in the 1990s Zuma accepted 4 million rand (hundreds of thousands of dollars) in bribes from the French arms company Thint to use his influence within the ANC and government stop investigations into whether multibillion-dollar arms contracts with the government had been secured through bribes.

At a news conference later, Zuma complained that he was being tried in the media.

"There was an investigation which was conducted publicly against me, I was threatened to be charged in public, there were things said about me by those investigating," he said. "My problem was, `Why are these things being said in public?' If I have a case to answer, then take me to court."

Zuma has consistently denied the allegations and said he is being pursued by prosecutors for political reasons.

The possibility Zuma would be charged with corruption had hovered over the ANC congress since it opened Sunday, but his supporters had insisted he was innocent and the target of a political smear campaign.

The ANC leader is traditionally the party's presidential candidate, and overwhelming support for the party throughout South Africa has ensured victories for first Nelson Mandela in 1994, then Mbeki in 1999 and 2004. Mbeki is prevented by constitutional term limits from running again in 2009, but if he had won a third term as ANC leader, he would have been in position to groom his successor.

The prosecutor's comments Thursday were likely to focus attention on the new deputy president of the African National Congress, Zuma ally Kgalema Motlanthe, who would be in line to take over the ANC — and, presumably, its presidential nomination — should Zuma be forced to step aside.

In his former position as secretary-general, the 59-year-old Motlanthe was in charge of the day-to-day running of the party. Often seen at Zuma's side, he also has maintained relationships with people inside Mbeki's camp.

He told reporters this week that the prospect of Zuma facing fresh charges "is very difficult to deal with." He noted that Zuma already has been charged in the case, in 2005, when it was thrown out of court.

"The prosecution will have a second bite at him and we will see how that pans out," Motlanthe said.

Mbeki fired Zuma as the country's deputy president in 2005 after Zuma's financial adviser was convicted of trying to elicit a bribe for Zuma to deflect investigations into the arms deal.

Last year, Zuma was acquitted of raping a family friend. He outraged AIDS activists by testifying that he had unprotected, consensual sex with the HIV-positive woman and then took a shower in the belief that it would protect him from the AIDS virus.

Zuma rose to power on the backs of trade unionists, communists and the poor. His challenge now is to satisfy his supporters without sacrificing the nation's economy.

Thursday, during an address to the party, Zuma pledged no radical shift from Mbeki's market-oriented policies, which produced an economic boom and created a small black elite, but whose benefits have not yet trickled down.

"ANC policies, including economic policies that have been adopted at this conference, do not indicate a fundamental shift from the policies that the ANC has adopted since it has come into power," Zuma said during the speech. "There is therefore no reason why the domestic or international business community or any other sector should be uneasy."

"I think he has a track record that is very good in addressing the issue of fiscal discipline," Zuma said.

But he said he had a mandate to strengthen the ANC's historic alliance with the Communist Party and trade unions. Zuma also said the ANC must work with government to build a caring society, and noted the party supports redistributing 30 percent of South Africa's land to those hurt by apartheid by 2014.