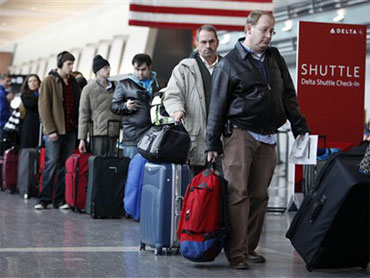 In the wake of the incident on board Northwest Flight 253 on Christmas Day, airlines, airports and the Transportation Security Administration wasted no time imposing new rules, procedures and protocols, almost all of them guaranteed to make your next trip to the airport -- and your next flight experience -- even worse than you've already gone through.

The problem with this kneejerk reaction, of course, is that it also sends the wrong message about airline and airport security -- that it's not effective to begin with -- but more on that later.

The TSA has been extraordinarily quiet about announcing its new security rules, other than to say there would be different rules for different airports and that they would not be announcing them. What the TSA did say (not surprisingly): Get to your airport early.

In the U.S., here's what passengers can count on for domestic flights: a highly visible security show of force at international gateway airports -- Chicago, JFK (in New York), LAX (in Los Angeles), SFO (San Francisco), Atlanta, DFW (Dallas Fort Worth) -- bomb sniffing dogs and an increase in "secondary" inspections -- pat downs and, where available, a greater use of those sniffer machines.

The real changes are coming from individual airlines and overseas airports, with new carryon luggage limits imposed by airports and some airlines, and new onboard passenger rules of behavior.

British Airways is limiting carry-on luggage on flights to the U.S., perfect for the post-holiday crowds. Only one item of hand luggage will be allowed. This is going to be particularly tough for those passengers flying thru Heathrow or Gatwick from other parts of the world and then connecting there. They boarded their initial flights with two carry-ons, and will now be denied boarding their British Airways flight. A few years ago, after the August 2006 liquid scare, British airports imposed the same rule. The result: Many frequent flyers, myself included, boycotted British airports and flew through other European airports and cities instead, at great cost to British Airways.

Air Canada is also limiting carry-on bags to one per passenger.

And now it gets even sillier:

For all U.S.-bound aircraft originating in a foreign country (this also includes Puerto Rico and the U.S. Virgin Islands), passengers will not be able to leave their seat approximately one hour prior to landing. There will be no public address announcements regarding the position of the aircraft, or landing announcements.

And remember your one carry-on item allowed? You cannot access it during the one-hour period prior to landing. This also includes magazines, newspapers, books, and personal electronic devices during the one hour pre-landing period. All pillows and blankets will be collected one hour prior to landing. Flight crews are being told to stow the blankets and pillows in the galleys, not in the overhead compartments. And all onboard IFE (in-flight entertainment) systems will be disabled (these are the systems that usually show the electronic map on the screens and the aircraft position).

And even though the U.S. government then eased the rules somewhat, and left it up to the discretion of individual airline pilots about allowing passengers to get out of their seats during the last hour of flight, very little could actually disguise the REAL problem -- what no one wants to talk about is this: After Richard Reid's incident with the attempted shoe bombing, we were all then required to take off our shoes and put them on the conveyor belt. Sounds good, except those machines can't recognize chemical explosives. It was / is all for show.

I've said this in the past, and i'll say it again -- it was an attempt to make people who didn't fly very often feel better. But those of us who DO fly very often KNOW better. And there are now many foreign airports that no longer require passengers to take their shoes off.

Translation: There is no standard, unilateral application of security for airline passengers worldwide. Equipment is either not working, or not effective in combating chemical explosives. And the governing agencies -- in this case the TSA, are, sadly, and historically, reactive at best.

Let's look at the numbers: Since 2002, the TSA has spent more than $800 million on new air passenger screening technologies. Sounds good, right? One small problem: In the past seven years, and despite this huge expenditure, the TSA has not deployed that technology. What's worse, the agency is not even sure that any of the ten new systems can address threats like the one on Christmas Day in Detroit.

Think that's bad? Read on: Even the Department of Homeland Security's own inspector general has documented some pretty serious passenger and baggage screening lapses -- failures -- at airports throughout the U.S. In some random tests to evaluate screener performance, inspectors were easily able to sneak low-yield detonators, explosives and incendiary devices onto planes.

What a lethal combination: technology that has not been deployed, and screeners failing on the job.

But wait --we have new rules that will change all that, right?

Wrong. What these new rules represent -- at least in my opinion: a pathetic example of history repeating itself.

Here's what's not being addressed during all of this:

• On U.S. domestic flights, while the TSA is still strip-searching nuns looking for tweezers, a majority of the cargo carried in the very bellies of those flights is not inspected.

• Most technology being used at airport security screening checkpoints is not able to recognize PETN or other chemical explosives. And let us not forget that a syringe is not a prohibited item.

This has nothing to do with what we do on the plane. It all has to do with how we are supposed to clear security ON THE GROUND before we ever get on the plane!

The REAL key here is that either you clear through security and the security systems are effective, or they're not. Denying me an extra carry-on bag, or a book, or a blanket, or not allowing me to leave my seat during the last hour of flight does little to camouflage the weakness of current airport security systems on the ground.

And so, once again, as well-intentioned as these new rules may be, they are reactive in nature, have no basis in common sense, and are punishing us in the air for the failure of security agencies on the ground. Thousands upon thousands of passengers will be delayed and / or inconvenienced, and the actual level of security will essentially remain the same, at best.

For the moment, we have no choice but to adjust to the new rules. But we need to lobby our elected representatives and encourage them -- and remind them that, while all of us support better security, it has to be based on intelligence and common sense. Security without those two ingredients is stupidity.

And in the meantime, my advice: Get to the airport two- to-three hours early for domestic fights, four hours early for international flights and, if at all possible, on domestic flights, do what I do -- courier your bags ahead of time. I use FedEx, but there are 16 other services, including UPS, that can do this for you. In the past, I've saved two-and--a-half hours PER FLIGHT by not checking bags. Now, I'll probably save even more time.