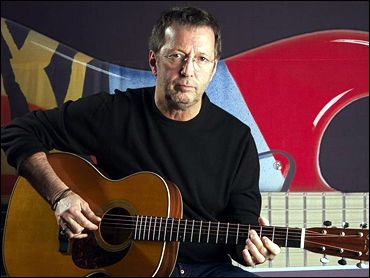 Blues rocker Eric Clapton made a new record Thursday night when he sold dozens of his guitars at auction to raise $7.4 million for the addiction treatment center he founded in the Caribbean.

The highlight of the two-hour, 88-lot sale at Christie's Auction House in New York was spirited bidding on "Blackie," a composite Fender Stratocaster that Clapton used on stage for much of the 1970s and 1980s. It fetched $950,000, a world auction record for a guitar and more than double the previous record price for a Clapton guitar.

Clapton made "Blackie," which debuted in 1973 at benefit concert in London, from several Stratocasters he bought in the United States. It accompanied him on tour in Europe, the United States and the Orient.

Another record was set with the 1964 red Gibson ES-335 that Clapton used in his years with Cream and which, reports said, the British rocker was most sentimental about. It sold for $847,500, a world auction record for a Gibson guitar.

"Crash 3," Clapton's newest Fender Stratocaster decorated by street artist Crash, has been with the musician on his latest tour in support of his new album, "Me and Mr. Johnson," and was last used onstage the night before the auction. It fetched $321,100.

In addition to the 56 guitars from Clapton's collection, the auction included some guitars donated by his friends and fellow musicians, including The Who's Pete Townsend, Stevie Ray Vaughan, Queen's Brian May, Roger Waters, and Robert Cray. "Lenny," Vaughan's 1965 composite Fender Stratocaster, sold for $623,500.

The only triple inductee (as a member of the Yardbirds, Cream and as a solo artist) into the Rock & Roll Hall of Fame, the Grammy-winner is known for numerous hits, including "Layla" and "Tears in Heaven."

In 1997, Clapton, who battled a heroin addiction himself, founded Crossroads Centre in Antigua, where he has a home. The facility specializes in the treatment of alcohol, drugs and other addictive disorders. A 1999 auction of Clapton guitars at Christie's also benefited Crossroads.

Tim Sinnott, Crossroads' executive officer, told the packed crowd in the auction auditorium that the proceeds from this sale would be used to open a 16-bed halfway house and continue the facility's international financial assistance programs.