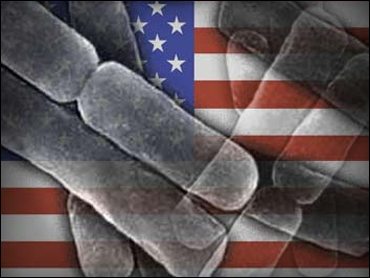 About 350,000 pieces of mail addressed to federal offices are being irradiated daily in an effort to thwart any further anthrax-by-mail attacks.

There have been complaints from a half-dozen Senate office that staffers working with mail have suffered eye, nose and throat irritation, headaches, a burning sensation on hands and face, dizziness and nausea.

In one incident, two Commerce Department workers went to a hospital complaining of nausea, breathing problems and throat irritation after they opened a package and fumes escaped.

The new task force, which held its first meeting this week, includes representatives from the Postal Service, White House Office of Science and Technology Policy, Environmental Protection Agency, Centers for Disease Control and Prevention, Office of the Attending Physician, Senate Sergeant at Arms and the Chief Administrative Office of the House.

Currently, the only mail being irradiated is that addressed to federal offices in Washington — that includes ZIP codes 20200 to 20599.

Some mail destined for the general public was irradiated previously but that is not now being done, postal officials said.

Long-term plans call for more widespread radiation of mail or installation of equipment to detect any biological hazards. But while more radiation machines are being built they have not yet been delivered.

The irradiation process does not make the mail radioactive.

However, Thomas Day, postal vice president for engineering, said the process can cause paper to give off carbon monoxide and ozone. In addition, he said, the plastic used to wrap mail during the process might produce volatile compounds.

Carbon monoxide can bind with hemoglobin in the blood, reducing its ability to carry oxygen throughout the body, said Dr. Milan J. Hazucha, a pulmonary expert at the University of North Carolina School of Medicine.

But, he said, to cause illness the gas has to be breathed in high concentrations for a long period of time. The small amount that could be produced from a few envelopes should not be dangerous, he said.

Exposure to high concentrations of ozone over several hours can produce throat irritation and cough, he said.

A few people may be hypersensitive to these gases and may have a reaction to smaller amounts, Hazucha added.

Day said that some postal workers complained of headache when working for long periods opening packages of mail that had been returned from irradiation treatment. That was cured, he said, by installing ventilation hoods, fans and filters to draw any fumes away from the workers.

Currently, Day said, irradiated mail is ventilated for at least 24 hours to eliminate any fumes and gases before it is delivered.

People have different levels of reaction to it, he said. Walks urged the post office to analyze these gases to determine exactly what they contain and provide a clear explanation to people who handle mail.

Day said that the post office is looking into eliminating the plastic wrapping and simply placing the mail in cardboard containers for irradiation.

Walks said the post office "should give (mailroom workers) instructions on how to open it. It's not that it's unsafe, but there's a best practice for how to handle this new kind of mail," he said.

The irradiation process also dries out paper, increasing the amount of dust and resulting in the paper drawing moisture from the skin of people handling the mail, Postal Senior Vice President Deborah K. Wilhite said. She urged that people who experience dry skin use hand creams.

Wilhite added that while the source of the illnesses remains unknown, Washington has had unusually warm weather, which can lead to people developing allergies as plants begin to release pollen early.

She said the case at the Commerce Department turned out to be an asthma attack that occurred when a staff member who was on vacation returned to find her mail in a closed box that released a burst of dust when opened.