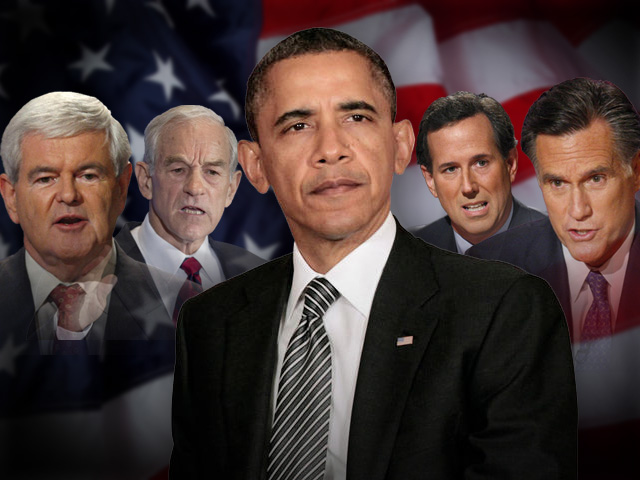 According to a new USA Today/ Gallup survey, in a head-to-head match up against President Obama, Republican presidential contender Rick Santorum performs slightly better than his GOP rival Mitt Romney. The poll undercuts Romney's electability argument against Santorum just one day ahead of a critical primary in Michigan.

Nationally, Santorum beats Mr. Obama 49 percent to 46 percent, the poll shows, while Romney ties with the president at 47 percent. The national survey, conducted February 20-21, has a four-point margin of error, meaning both GOP candidates are statistically tied with Mr. Obama.

In a survey of voters in 12 swing states by USA Today and Gallup, Santorum's lead against Mr. Obama widens. He beats the president 50 percent to 45 percent. The swing state survey, conducted February 14-21, also has a four-point margin of error. In this poll, Romney bests Mr. Obama 48 percent to 46 percent.

The USA Today/Gallup survey shows both Mr. Obama and Romney may be suffering from voters' perceptions about health care reform -- three of four voters in swing states say Mr. Obama's reforms are unconstitutional. Meanwhile, 27 percent of Republicans and Republican-leaning independents in the swing states say they are less likely to support Romney because of the Massachusetts health reforms he signed into law (7 percent said they're more likely to back him because of the reforms).

However, another survey of national voters released today from Politico and George Washington University suggests that neither Romney nor Santorum could beat Mr. Obama at this point.

In this survey, Mr. Obama leads Romney 53 percent to 43 percent in a head-to-head match up. The president similarly leads Santorum 53 percent to 42 percent. The survey, conducted February 19-22, has a 3.1 percent margin of error.

While Romney performs just slightly better against the president in this poll, the survey shows that among Republican voters nationally, Santorum bests Romney 36 percent to 34 percent.

Electability has been a key argument in Romney's campaign: On Friday, the former Massachusetts governor said he's the only Republican presidential candidate that can beat Mr. Obama in the general election. In every contest so far with entrance or exit polls, the most important candidate quality for voters is the ability to beat Mr. Obama.

Romney will face a critical challenge on Tuesday, when Republicans will vote in both Michigan and Arizona. Expectations are especially high for Romney in Michigan, where he was born and raised.