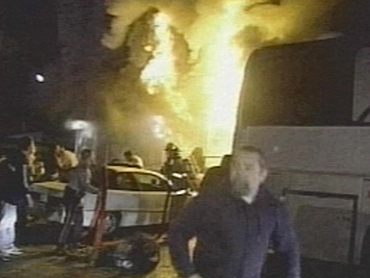 The former manager of the heavy metal rock group Great White has indicated a willingness to change his pleas to some counts in the deadly 2003 nightclub fire, a judge said Tuesday.

Superior Court Judge Francis Darigan said in a statement that Daniel Biechele is willing to plead to "certain counts" of the indictment. The statement did not make clear what charges Biechele would plead to, or when. The judge scheduled a court session for Tuesday afternoon and said Biechele was not expected to be there.

Biechele has pleaded innocent to 200 counts of involuntary manslaughter for the blaze, which began when he ignited pyrotechnics during a Great White performance at The Station nightclub in West Warwick.

Sparks from the pyrotechnics ignited highly flammable foam lining the club's wall and ceiling, creating a fast-moving blaze that also injured more than 200 people in the fourth-deadliest fire in the country's history.

John "Terry" MacFadyen, a lawyer for Biechele, would not comment on the judge's statement. Another defense attorney, Tom Briody, did not return calls.

Brothers Jeffrey and Michael Derderian, who owned the club, also were charged with 200 counts each of involuntary manslaughter. They are accused of installing the flammable soundproofing foam in violation of the state fire code. They have pleaded not guilty.

Jeff Pine, attorney for Jeffrey Derderian, would not comment.

The three defendants were charged with two counts of involuntary manslaughter for each of the 100 people killed. One count per death alleges criminal negligence, the other accuses the defendants of committing underlying offenses that led to the deaths.

Biechele has said through his lawyer that he had permission to light the pyrotechnics during the Feb. 20, 2003, concert, but the Derderians dispute that.