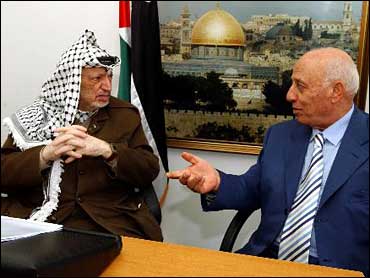 Yasser Arafat's Fatah faction approved a new Palestinian Cabinet on Saturday that included several longtime allies of the Palestinian leader, but not a key security official who Israel and the United States had hoped would rein in Palestinian militants.

With the ouster of security chief Mohammed Dahlan, it appeared even less likely that the Palestinian security forces would begin dismantling militant groups, as required by the U.S.-backed "road map" peace plan. Israel has said it will not move on the plan unless such action is taken.

In the Gaza Strip, about 1,000 Dahlan supporters staged a protest, burning pictures of Fatah officials.

Israel and the United States have been trying to sideline Arafat, accusing him of encouraging terror attacks and blocking peace efforts. However, Arafat retains significant power, and the incoming Palestinian prime minister, Ahmed Qureia, has given the Arafat-controlled Fatah movement considerable say in forming the Cabinet.

Early Saturday, Qureia met with Arafat to review his Cabinet choices before presenting them to Fatah.

There was no immediate Israeli reaction to the new Cabinet.

The Cabinet was formed a day after a Palestinian gunman sneaked into a Jewish West Bank settlement where residents were celebrating the start of the Jewish New Year, knocked on the door of a trailer home and shot and killed a man and a baby girl.

It was the first deadly attack by Palestinians since Israel's security Cabinet decided Sept. 11 to "remove" Arafat.

In an interview broadcast Saturday on Israel Radio, Prime Minister Ariel Sharon refused to give a timetable for Arafat's removal. "It depends on what happens on the ground," he said, appearing to confirm the belief that a major Palestinian terror attack could trigger such action.

"Arafat is responsible for the killing of hundreds, if not thousands, of Jews," he said. "The sword is hanging over his head, and this is a good thing."

Despite the threat against their leader, officials from Arafat's Fatah movement named 23 ministers to the Cabinet on Saturday. The remaining one to three slots will be filled in coming days, and the Cabinet then will be presented to the Palestinian parliament for approval, Palestinian officials said on condition of anonymity.

The new Cabinet includes several Arafat supporters, including Yasser Abed Rabbo, whom outgoing Prime Minister Mahmoud Abbas kept out of his government, and Saeb Erekat, who resigned in May after being caught in a power struggle between Arafat and Abbas.

In another sign of Arafat's influence over the process, a longtime ally, Maj. Gen. Nasser Yousef, was named to the post of interior minister, putting him in charge of the security forces, Palestinian officials said.

Abbas had held the title of interior minister in his government, but the security chief in effect was Dahlan, who had enjoyed U.S. support, even though he also backed away from cracking down on militants.

During Abbas' four months in office, Arafat was constantly wrangling with his prime minister over control of the security forces. Arafat commanded four branches, and Abbas, as interior minister, had control over the other four.

The split paralyzed Abbas and made it impossible for him to take any action against the militants, even largely symbolic moves that might have been considered by Washington as partial implementation of the road map. Abbas, like other Palestinian officials, has said he would not confront the militants, for fear of sparking internal fighting.

Under the new arrangement, Arafat heads a 12-member national security council that will set policy and work with the interior minister. Yousef has worked with Arafat for nearly four decades.

Fatah also named several younger leaders to the Cabinet, including Jawad Tibi, a popular Palestinian lawmaker from the Gaza Strip who is to be health minister.

Israel has said it would not deal with an Arafat-controlled Cabinet. However, Prime Minister Ariel Sharon said in an interview Friday with the Israeli daily Yediot Ahronot that Qureia will be judged on his deeds.

There was no claim of responsibility for Friday's shooting in Negahot that killed a 30-year-old man and a 7-month-old girl. Soldiers guarding the settlement near the West Bank city of Hebron killed the attacker before he could escape, said Capt. Jacob Dallal, an army spokesman. The girl's parents were lightly injured in the shooting.

In an effort to prevent such attacks, Israel had stepped up security during the two-day holiday that ends at sundown Sunday.

Palestinians were banned from entering Israel and those in the West Bank were barred from leaving their communities. Thousands of police officers were also sent to guard synagogues, parks and intersections in Israel.