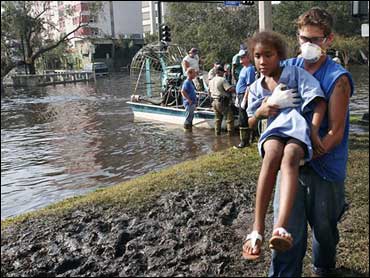 Two of New Orleans' most troubled hospitals were evacuated late Friday after desperate doctors spent days making tough choices about which patients got dwindling supplies of food, water and medicines.

Rescuers finally made it into Charity and University hospitals and evacuated all remaining patients and staff.

"The last information I have is that all of the buildings are empty," said Don Smithburg, head of the Louisiana State University hospital system.

About 2,200 people were evacuated, including 363 patients. Some were taken out on stretchers and others on piggyback.

Three terminally ill patients died during the evacuation. Smithburg did not know how many died waiting for help.

At Charity, the largest public hospital and trauma center in the city, gunshots on Thursday had prevented efforts to evacuate more than 250 patients.

The evacuation resumed Friday after state police stepped up their protection, Smithburg said.

Earlier in the day, the hospital's morgue had 12 bodies, and another five were stacked in a stairwell, in both cases under water. Other bodies were in other parts of the hospital, Smithburg said.

With food and water running out, some hospital employees gave each other intravenous fluids while waiting for rescue, Smithburg said.

As for the doctors and nurses: "Some of them are on the brink of being unable to cope any longer. We just can't get our people out fast enough," Smithburg said.

At University Hospital, about 500 family and staff members had joined 110 very ill patients and hundreds of others from the general community needing evacuation.

Paula Dees of Tallahassee, Fla., said her father, Dr. Oscar Ballester, called her early Friday morning from University, where he and his wife, Dr. Gabriela Ballester, had been working since Saturday.

"They're just begging for help," Dees said. "They're rationed a liter of water a day and have minimal food. He keeps saying, 'They forgot about us."'

Doctors at both Charity and University had called The Associated Press on Thursday, pleading for help.