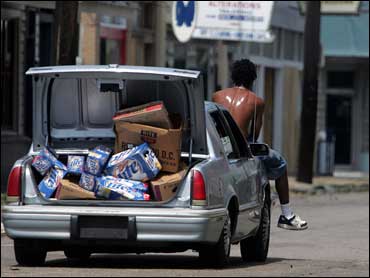 Mayor Ray Nagin ordered 1,500 police to leave their search-and-rescue mission Wednesday night and return to the streets of New Orleans to stop looting that has turned increasingly hostile.

"They are starting to get closer to heavily populated areas — hotels, hospitals, and we're going to stop it right now," Nagin said.

Gov. Kathleen Blanco said she has asked the White House to send more people to help with evacuations and rescues, thereby freeing up National Guardsmen to stop looters.

"Once we get the 3,000 National Guardsmen here, we're locking this place down," Mayor Ray Nagin said. "It's really difficult because my opinion of the looting is it started with people running out of food, and you can't really argue with that too much. Then it escalated to this kind of mass chaos where people are taking electronic stuff and all that."

CBS News correspondent Lee Cowan reports (video)
reports that the despair went far beyond looting, witnessing a man's body who had jumped to his death.

Amid the chaos Wednesday, thieves commandeered a forklift and used it to push up the storm shutters and break the glass of a pharmacy. The crowd stormed the store, carrying out so much ice, water and food that it dropped from their arms as they ran. The street was littered with packages of ramen noodles and other items.

Looters also chased down a state police truck full of food. The New Orleans police chief ran off looters while city officials themselves were commandeering equipment from a looted Office Depot. During a state of emergency, authorities have broad powers to take private supplies and buildings for their use.

Managers at a nursing home were prepared to cope with the power outages and had enough food for days, but then the looting began. The Covenant Home's bus driver surrendered the vehicle to carjackers after being threatened.

Bands of people drove by the nursing home, shouting to residents, "Get out!" On Wednesday, 80 residents, most of them in wheelchairs, were being evacuated to other nursing homes in the state.

"We had enough food for 10 days," said Peggy Hoffman, the home's executive director. "Now we'll have to equip our department heads with guns and teach them how to shoot."

At one store, hordes of people from all ages, races and walks of life grabbed food and water. Some drove away with trunkloads of beer.

At one point, two officers drew their guns on the looters, but the thieves left without incident. One of the officers said he is not going to arrest anyone for snatching up food and water.

One young man was seen wading through chest-deep floodwater, carrying a case of soda, after looting a grocery store.

"We will restore law and order," Blanco said. "What angers me the most is that disasters like this often bring out the worst in people. I will not tolerate this kind of behavior."

John Matessino, president of the Louisiana Hospital Association, said he had not heard of anyone breaking into the hospitals, but he added that thieves got into the parking garage at one hospital and were stealing car batteries and stereos.

New Orleans' homeland security chief, Terry Ebbert, said looters were breaking into stores all over town and stealing guns. He said there are gangs of armed men moving around the city. At one point, officers stranded on the roof of a hotel were fired at by criminals on the street.

The Times-Picayune newspaper reported that the gun section at a new Wal-Mart had been cleaned out by looters.

Authorities said an officer was shot in the head and a looter was wounded in a shootout. The officer and looter were expected to survive.