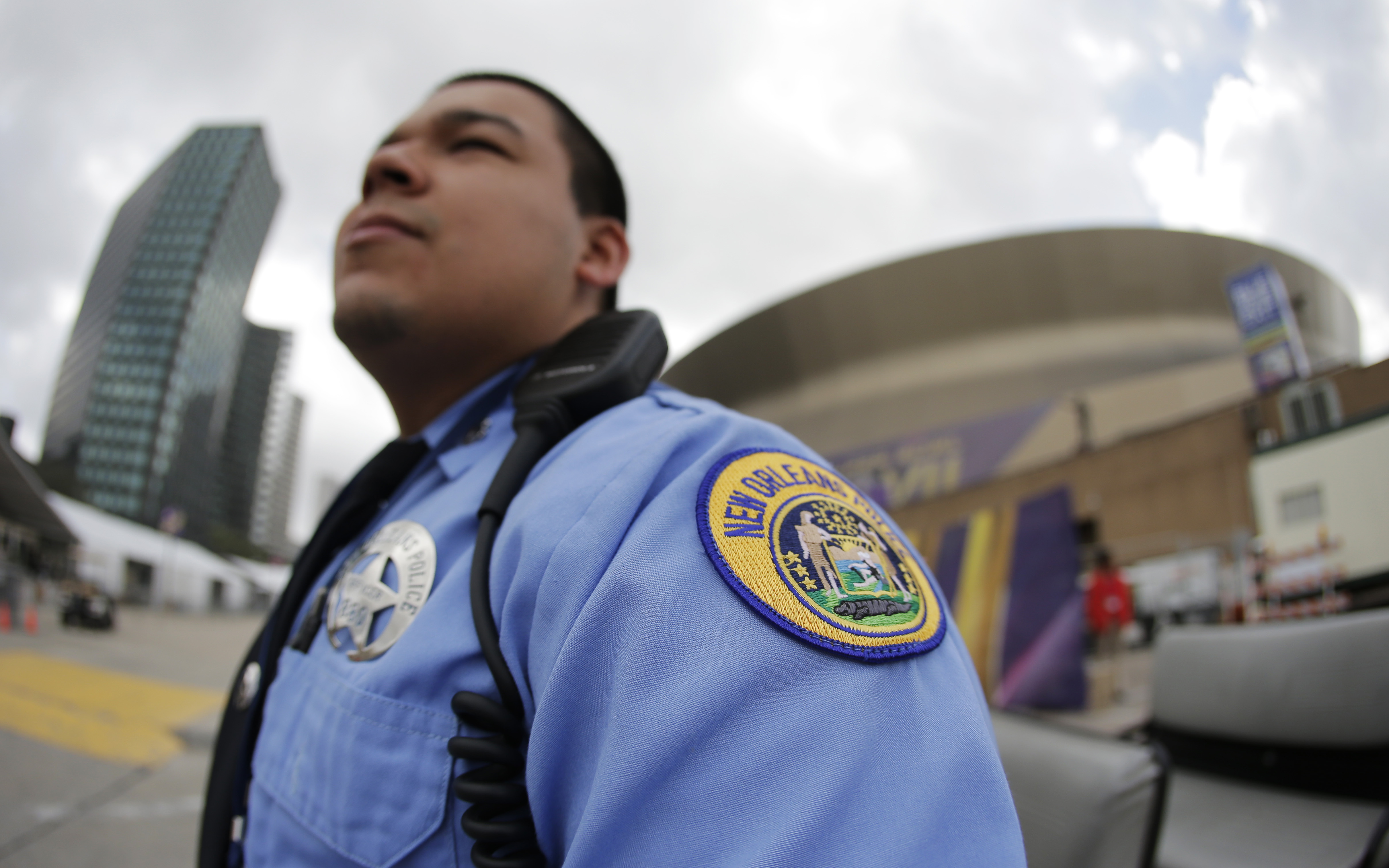 NEW ORLEANS A New Orleans police force famed for its crowd control prowess is getting help from state and federal authorities as the city hosts an estimated 150,000 Super Bowl fans while preparing for the raucous buildup to Mardi Gras, which also draws thousands to the historic French Quarter and its restaurants, bars and strip clubs.

The security challenges began in earnest Friday night with the first of the city's major float-filled Mardi Gras season parades. This week, the parade schedule is on hold while the Super Bowl takes center stage. Mardi Gras preparations resume once Sunday's game is over, and the parades roll again starting Wednesday.

The city's police force of 1,200 officers is bolstered this week by more than 200 Louisiana State Police troopers and hundreds of federal authorities from a variety of agencies.

Homeland Security Secretary Janet Napolitano was in town for a Wednesday news conference outlining security precautions, including Immigrations and Customs Enforcement scans of cargo shipped to the game site and Coast Guard work to assure maritime safety and security along the Mississippi River. Game-day plans will include flight restrictions in the airspace near the Superdome, pat-down searches of ticket holders and the use of dogs to sniff out contraband.

"This week, there is no safer place to be than the city of New Orleans," added Raymond Parmer, a special agent with ICE.

Even with all the help, the combination of Super Bowl and Mardi Gras season means New Orleans Police Department officers are working more than three weeks' worth of 12-hour days, on the lookout for everything from petty crime and public drunkenness to random gunfire and the threat of terrorism. It will be an exhausting stretch that city officials say will cost the city several million dollars in police overtime.

"If we can, we'd like to give them some time down," said police chief Ronal Serpas. "But if we can't, they know it and they'll stand up for it."

It's also a unique chance for Serpas to show off one of the strengths of a department beset by scandals involving brutality and mismanagement. City officials have carried out numerous reforms aimed at cleaning up the department, which has seen five officers convicted of civil rights violations stemming from deadly shootings of unarmed residents after Hurricane Katrina.

For years, though, crowd control has been the department's bright spot, especially during Mardi Gras revelry on the narrow streets of the nearly 300-year-old French Quarter, home to fancy restaurants and art galleries as well as sleazy bars and strip joints.

"I think the NOPD does take a particular pride in its long-standing history and long-standing demonstration that managing large crowds is something we do very well," said Serpas, who is in his third year running the department.

Shoulder-to-shoulder, alcohol-fueled crowds often spill over into the neighboring Faubourg Marigny, an increasingly popular area of music clubs and restaurants. A 15-block-long stretch of Poydras Street, linking the Superdome to the Mississippi River and the massive Harrah's Casino, is seeing increased foot traffic during sports events with the opening of more bars and restaurants in recent years. And, outside the Quarter, lavish Carnival season parades draw tens of thousands to the miles-long routes. During the final weekend of Mardi Gras, streets of the metro area can be packed with more than a million people, and more than a few will be overdoing it.

"The thing about Mardi Gras crowds is, we get this impression that some of the people may have been drinking," Serpas deadpanned.

Police perched atop horses watch for problems on the horizon and keep people moving, while uniformed officers on foot mingle and build rapport with the partiers to keep the peace. Plainclothes officers will be on the lookout for weapons and other less visible problems. Arrest numbers vary from year to year, though police commonly arrest at least several hundred people each year during Mardi Gras-related celebrations — most for relatively minor transgressions.

But the murder rate is ten times the national average. During Super Bowl week, Serpas is quadrupling the number of officers patrolling the French Quarter. Joining the department's officers are more than 200 state troopers and about 100 officers from surrounding local jurisdictions. Also, with the Super Bowl considered a potential terrorist target, there is a beefed-up federal contingent. That includes close to 100 extra FBI personnel supplementing the regular New Orleans FBI staff of 200 agents and support staff, said Anderson.

The New Orleans FBI office will be home to a joint operations center where the goings-on will be constantly monitored by representatives from all involved state, local and federal law enforcement and security agencies. Such a center is standard operating procedure for the Super Bowl each year, Anderson said.

New Orleans police will take the lead on local crime, traffic or public disturbances, Anderson said. "If there's any inkling of a terrorist attack or threat of terrorist attack in any way," he said, "then we kick in with our full apparatus."

At Louis Armstrong International Airport, the Transportation Safety Administration is adding personnel and equipment to handle security checks, said TSA spokesman Jon Allen. He said there will be 11 additional checkpoint lanes added to the 14 existing lanes for passenger screening.

Five additional explosives-detecting machines have been added to screen checked baggage, and more than 100 transportation security officers will be brought in from other airports starting Sunday to help local airport staff, Allen said. The officers will stay through the middle of next week, he said.

Beyond the city's police costs, exact security costs are difficult to determine. Federal officials declined to detail specifics, and an NFL representative would say only that the league will spend millions.

Mardi Gras season happens every year, and the city is no stranger to Super Bowls, having hosted nine — including the 2002 game that followed the Sept. 11, 2001, terrorist attacks. Although security planning for the Super Bowl has grown increasingly complex since the attacks, no acts of terror or other serious problems have been reported at Super Bowls in recent years.

This year, officers will be prepared to reroute or block vehicle traffic when streets are full of pedestrians. As for terrorism worries, Anderson said preparations include formation of SWAT teams and "hazardous incident teams" — specialists in hazardous materials or explosives assembled from the various federal local and state agencies.

Serpas welcomes the help, but he said much of the cooperation comes from the partiers themselves — a diverse crowd that can consist of locals and families picnicking on parade routes and a more adult, heavier-drinking crowd downtown and in the Quarter.

"You look at that parade route, and on any one block there could be 10,000 people and two cops," Serpas said. "How do those two cops stay safe, and how does that crowd stay safe? We're actually working together."