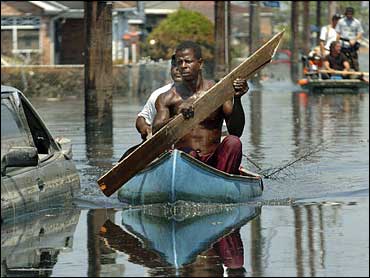 New Orleans turned much of its attention Sunday to gathering up and counting the dead across a ghastly landscape awash in perhaps thousands of corpses. "It is going to be about as ugly of a scene as I think you can imagine," Homeland Security Secretary Michael Chertoff warned.

As authorities struggled to keep order, police shot eight people, killing five or six, after gunmen opened fire on a group of contractors traveling across a bridge on their way to make repairs, authorities said.

Air and boat crews searched flooded neighborhoods for survivors, and federal officials urged those still left in New Orleans to leave for their own safety.

To expedite the rescues, the Coast Guard requested through the media that anyone stranded hang out brightly colored or white linens or something else to draw attention. But with the electricity out though much of the city, it was not known if the message was being received.

With large-scale evacuations completed at the Superdome and Convention Center, the death toll was not known. But bodies were everywhere: floating in canals, slumped in wheelchairs, abandoned on highways and medians and hidden in attics.

"I think it's evident it's in the thousands," Health and Human Services Secretary Michael Leavitt said Sunday on CNN, echoing predictions by city and state officials last week. The U.S. Public Health Service said one morgue alone, at a St. Gabriel prison, expected 1,000 to 2,000 bodies.

In the first official count in the New Orleans area, Louisiana emergency medical director Louis Cataldie said authorities had verified 59 deaths, 10 of them at the Superdome.

CBS News Correspondent John Roberts reported that many are reluctant to leave their flooded houses, feeling safer amid toxic waters and rotting bodies.

"We need to prepare the country for what's coming," Chertoff said on "Fox News Sunday." "We are going to uncover people who died, maybe hiding in houses, got caught by the flood. ... It is going to be about as ugly of a scene as I think you can imagine."

Chertoff said rescuers have encountered a number of people who said they did not want to evacuate.

"That is not a reasonable alternative," he said. "We are not going to be able to have people sitting in houses in the city of New Orleans for weeks and months while we de-water and clean this city. ... The flooded places, when they're de-watered, are not going to be sanitary."

Evacuations continued late Sunday as Coast Guard helicopters picked up refugees from a dry stretch of Interstate 10 where they had been dropped off by rescue boats.

"We're not satisfied to leave, but they say it's going to be three or four months, so we need to go somewhere where we can have a life," said Tommy McDaniel, 38.

One of the last groups taken out Sunday was a family of six that included 3-year-old twins. The Coast Guard planned to resume evacuation flights Monday morning.

Earlier in the evening, a civilian helicopter crashed near the Danziger Bridge, but the two people on board escaped with only cuts and scrapes, according to Mark Smith of the state office of emergency preparedness.

In Sunday's confrontation, 14 contractors on their way to help plug the breech in the 17th Street Canal were traveling across the bridge under police escort when they came under fire, said John Hall, a spokesman for the Army Corps of Engineers. Police shot at eight people carrying guns, killing five or six, Deputy Police Chief W.J. Riley said. None of the contractors was injured, authorities said.

In addition to the lawlessness, civilian deaths and uncertainty about their families, New Orleans' police have had to deal with suicides in their ranks. Two officers took their lives, including the department spokesman, Paul Accardo, who died Saturday, according to Riley. Both shot themselves in the head, he said.

"I've got some firefighters and police officers that have been pretty much traumatized," Mayor Ray Nagin said. "And we've already had a couple of suicides, so I am cycling them out as we speak. ... They need physical and psychological evaluations."

"Too many people died because of lack of action, lack of coordination and some goofy laws that basically say there's not a clear distinction of when the federal government stops and when the state government starts," Nagin said. "And to have this happen in the United States of America in the state of Louisiana, and to not have immediate, immediate response regardless of the laws, is tragic."

The strain was apparent in other ways. Aaron Broussard, president of Jefferson Parish, dropped his head and cried on NBC's "Meet the Press."

At two of the city's damaged levees, engineers continued making repairs that would allow pumps to begin draining the floodwaters.

"The water is receding now. We just have a long ways to go," Mike Rogers, a disaster relief coordinator with the U.S. Army Corps of Engineers, said Sunday.

Hundreds of thousands of people already have been evacuated, seeking safety in Texas, Tennessee and other states. The first group of refugees who will take shelter in Arizona arrived Sunday in Phoenix. With more than 230,000 already in Texas, Gov. Rick Perry ordered emergency officials to begin preparations to airlift some of them to other states that have offered help.

In a devastated section on the edge of the French Quarter, people went into a store, whose windows were already shattered, and took out bottles of soda and juice.

Amid the tragedy, about two dozen people gathered in the French Quarter for the Decadence Parade, an annual Labor Day gay celebration. Matt Menold, 23, a street musician wearing a sombrero and a guitar slung over his back, said: "It's New Orleans, man. We're going to celebrate."