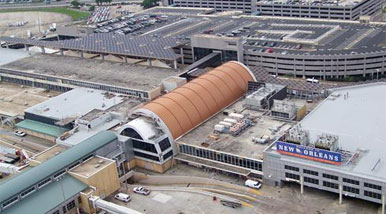 (CBS/WWL) KENNER, La. - A bullet from a hunting rifle that was being checked in at Armstrong International Airport in New Orleans Monday struck a United Airlines employee in the leg, according to CBS affilliate WWL.

The employee was taken to the hospital, officials said, where he was treated for non-life threatening injuries, said Sgt. Larry Dyess, Sheriff's Office spokesman.  The passenger was attempting to check the rifle in at the United Airlines ticket counter when it went off, Dyess said.

According to TSA rules, firearms carried as checked baggage must be unloaded, packed in a locked hard-sided container, and declared to the airline at check-in.

According to station WGNO, United Airlines issued a statement about the incident, saying the employee "sustained non-life-threatening injuries and is reported to be in stable condition." The airline added, "We are offering our support to the employee and his family."