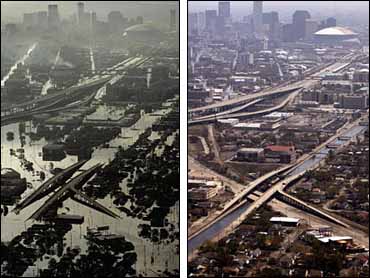 Bodies are being collected, water is still up to the rooftops in many neighborhoods, pollution is everywhere, and most city services are still not working, but inch by inch, New Orleans is getting less flooded and more functional.

CBS News correspondent Byron Pitts reports floodwaters are dropping by about 6 to 12 inches per day.

President Bush arrived in town Sunday, spent the night on the USS Iwo Jima, and will get his first up-close look at the destruction in New Orleans on Monday. He'll then fly to Gulfport, Miss., one of numerous cities and towns in Mississippi which took a heavy hit from Katrina's rampage through the Gulf Coast exactly two weeks ago.

Starting Monday, businesses owners in the central commercial district will be able to get temporary passes into the city so they can retrieve vital records or equipment needed to pay employees or otherwise run their companies.

Floodwaters which covered 80 percent of New Orleans at the worst of the deluge now cover 50 percent of the city, with pumps diverting the toxic mess bit by bit into adjacent Lake Pontchartrain.

The official death toll in Louisiana is now 197, with an unknown number of bodies yet to be found underwater and in flooded or isolated buildings.

Mississippi's death toll stands at 214 and is expected to go higher because rescue efforts have given way to recovering the dead buried under tons of rubble.

Sunday, recovery workers pulled an unspecified number of bodies from Memorial Medical Center, a 317-bed hospital in uptown New Orleans that closed more than a week ago after being surrounded by floodwaters.

Army Lt. Gen. Russel L. Honoré, commander of active duty troops engaged in hurricane relief, reiterated Sunday the number of dead would be "a heck of a lot lower" than initial projections of 10,000 or more.

Trash collection began over the weekend and the city's main wastewater treatment facility is expected to be back on line sometime on Monday, according to Sgt. John Zeller, an engineer with the California National Guard.

As hundreds of thousands of hurricane evacuees from Louisiana and Mississippi attempt to build new lives - some permanently, others temporarily - in dozens of states around the nation, doctors are carefully monitoring people in dozens of shelters for outbreaks of serious and infectious diseases.

Short term, doctors are watching for signs of viral diseases that could be linked to exposure to contaminants in the floodwaters. Long term, Commander Fransisco Averhoff of the U.S. Public Health Service says they're looking for the slow and silent killers, like tuberculosis.

Averhoff says the people who are sick are whisked away to hospitals for treatment. A big concern is having sick people in a shelter where they are living in close quarters.

"Many people in the Astrodome are now linking up with family and friends," said Honoré. "That's a good sign, and there is light at the end of the tunnel."

Mayor C. Ray Nagin, asked on NBC's "Meet the Press" whether New Orleans could stage Mardi Gras in February 2006, said he hasn't thought that far ahead but "it's not out of the realm of possibilities... It would be a huge boost if we could make it happen."

All over the nation, and in many parts of the world, the plight of Katrina's evacuees was center stage - literally - over the weekend as the six major networks including CBS, a division of Viacom, and four Viacom-owned cable channels - BET, MTV, VH1 and CMT - held benefit telethons. Another concert is planned for Monday night in Hollywood and other fundraisers are in the works, including one to be held in Mississippi at a date yet to be determined.

In New Orleans Sunday, numerous residents were able to visit their homes for the first time, however briefly, as floodwaters receded and work crews cleared trees, debris and downed telephone poles from major streets.

In some of the places where the floods are gone, something else has been left behind: a brown film covering everything, emitting nauseating fumes, leaving little left to salvage.

Burnt-orange rubble from terra-cotta tiles, wrenched from roofs and scattered about the French Quarter, wait in neat piles for collection along the curb.

Crime, which had surged in the first few days after the floods, is less of a problem now with the military in control and most of the city evacuated, except for a few thousand holdouts.

Donald Jones, a 57-year-old lifelong resident, is no longer armed when walking the street.

"The first five days I never went out of my house without my gun, now I don't carry it," Jones said, starting to laugh. "The only people I meet is military."

Floods have receded enough to allow for a drive down Esplanade Avenue, past the handsome, columned two-story home where French painter Edgar Degas once lived to the New Orleans Museum of Art in City Park.

The same can be said for Saint Charles Avenue. While many homes are deserted and the old green street cars are gone, the beauty of the Greek Revival and Victorian homes, fronted by a canopy of live oaks, overwhelms the sight of debris piled along the roadway.

"I think it's livable," said John Lopez, who moved to New Orleans from the New York City area about a year ago. "If they got running water to all these buildings that are obviously inhabitable, they could get the city cleaned up a lot faster because people would be cleaning up their own blocks and their own neighborhoods."

Lopez and others are among those in the city who survived the hurricane at home, refused the subsequent order to leave and have started to clean up their neighborhoods.

A bullhorn-wielding volunteer led relief workers in a chorus of "Amazing Grace." "You see the cleaning of the streets. You see the people coming out," said the volunteer with the bullhorn, Norman Flowers. "The people aren't as afraid anymore."

Some holdouts, trying to re-establish pieces of the city's inimitable character, have even found things to laugh about.

Barbara Hoover, who lives in the Faubourg-Marigny neighborhood just down river from the French Quarter, said the military's ready-to-eat meals are "just as good, if not better, than the South Beach Diet. They're amazing."