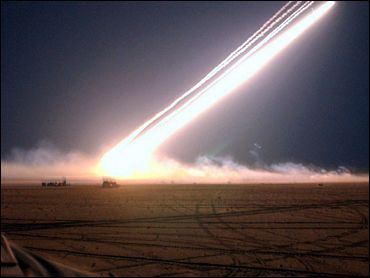 The United States used a new kind of missile for the first time in Iraq that can destroy the contents of the first floor of a building while leaving the rest of the structure intact, Defense Secretary Donald H. Rumsfeld told Congress on Wednesday.

American forces used another new kind of thermobaric bomb for the first time during the war in Afghanistan to clear out caves where Taliban and al Qaeda members were hiding. Putting a thermobaric warhead on a Hellfire missile — which are most often carried by helicopters such as the AH-64 Apache — allows the technology to be used by forces that can act more quickly and closer to the battle.

Rumsfeld said the new missile "can take out the first floor of a building without damaging the floors above, and is capable of reaching around corners, striking enemy forces that hide in caves or bunkers and hardened multi-room complexes."

The new Hellfire missile is an example of the kind of high-tech weaponry the Pentagon wants more money to develop, Rumsfeld told a Senate Appropriations subcommittee. He was testifying to support President Bush's $380 billion defense budget request for 2004.

The proposal would represent a 4.2 percent increase over this year's Pentagon budget, not including the more than $62 billion Congress approved for spending on the Iraq war.

Rumsfeld said Bush's budget proposal, despite the increase, took risks in putting money toward forming and equipping a lighter, more mobile military. The spending proposal is part of a four-year Pentagon budget plan that seeks to save $80 billion by 2009 by canceling or scaling back programs that don't fit into that vision.

"We've tried to balance those risks and it's not an easy thing to do," Rumsfeld said.

The U.S.-led victory over Saddam Hussein's forces in Iraq proved the value of moves to transform the military, Rumsfeld said. He said $24 billion of the budget proposal was for programs to support that transformation.

Rumsfeld said the speed of the three-week American advance from the Kuwait border to Baghdad is an example of the way the military should work in the future.

"It seems likely the enemy was not able to mount a coherent defense ... in part because the coalition advance was so much faster than anticipated," Rumsfeld said.

U.S. special operations forces had infiltrated Iraq before the war began, Rumsfeld told the Senate panel. Hundreds more surged into western Iraq and other regions of the country as regular military units crossed into southern Iraq from Kuwait, he said.

Those elite forces seized airfields, identified targets and worked to prevent Iraq from firing missiles at its neighbors, Rumsfeld said.

Bush's budget proposal includes a $1.5 billion increase for special operations forces, including adding more than 1,800 people to the elite units.