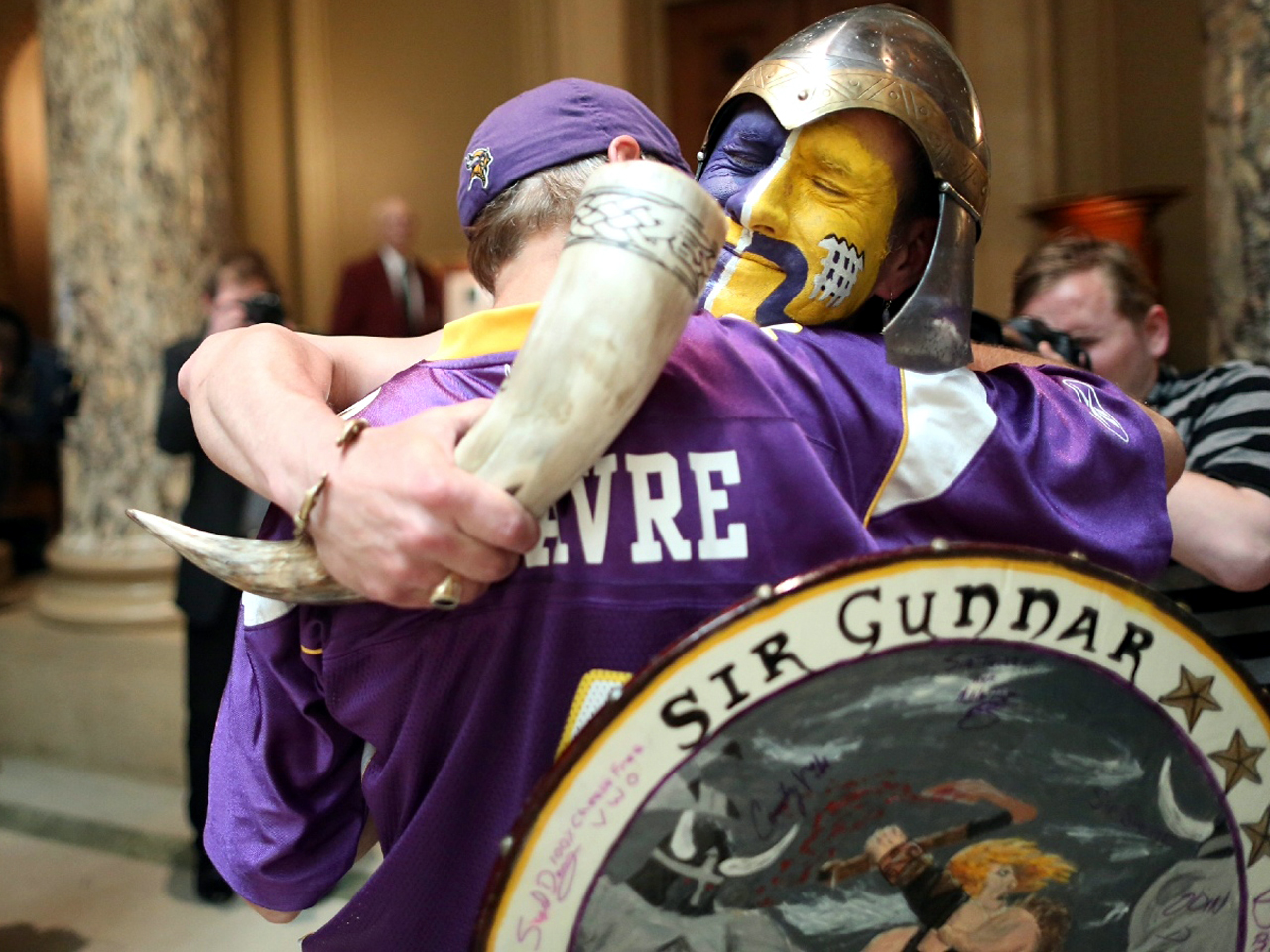 (AP) ST. PAUL, Minn. - Now that the Minnesota Vikings will get their new stadium, the worrying can begin over a gambling expansion designed to pay the state's share of the $975 million project.

By passing the final stadium bill Thursday, lawmakers committed the state to raising $348 million by allowing electronic pull-tabs and bingo in bars and restaurants. The financing plan drew skepticism on the bill's way through the Legislature, prompting the sponsors to include backup measures in case the pull-tab dollars don't materialize, including a lottery game and luxury suite taxes.

Gov. Mark Dayton has pledged to sign the stadium bill into law after serving as its chief cheerleader. Backers pushed it through the Legislature after years of failed attempts, despite opposition from no-new-spending Republicans, liberal Democrats and even the top House Republican, Speaker Kurt Zellers. Lawmakers were on the receiving end of an intense outpouring of support from Vikings fans, while the state's business leaders and labor unions also put their clout behind the project. Minneapolis Mayor R.T. Rybak brought $150 million from his city to the table, subject to a City Council vote later this month.

But money questions were on the sidelines Thursday as Vikings fans celebrated the bill's passage. In the Senate gallery, fans broke out in a rendition of the "Skol Vikings!" fight song, earning a reprimand from the Senate secretary.

"Let's build it!" shouted Vikings vice president Lester Bagley, the team executive who spent much of the past decade lobbying for the nearly $1 billion stadium. The new stadium will be built on the downtown Minneapolis site of the 30-year-old Metrodome, an inflatable bubble-topped building the Vikings argued did not generate enough revenue for the team to compete.

On Thursday, the Vikings and the University of Minnesota announced they have reached preliminary agreement on the Vikings' use of TCF Bank Stadium during construction of a new Vikings stadium. Under the agreement, the Vikings will pay the university a fixed fee of $250,000 per game. The combined rent and expected concessions and sponsorship revenue that the Vikings would share with the university would amount to $300,000 per game, or $3 million per regular NFL season. The Board of Regents takes up the agreement Friday, and university President Eric Kaler could sign the letter of intent in the next few days.

The Senate vote capped an amazing comeback for the Vikings' stadium dreams, which just a few weeks ago were fizzling before a visit from NFL Commissioner Roger Goodell crystallized fears that the Vikings could leave the state without a new home.

At a celebratory news conference, owner Zygi Wilf recalled when he and his brother Mark first took ownership of the team nearly seven years ago and being asked whether they would move the team.

"We kept on fighting that this day would come, and it's here today," Wilf said.

Dayton publicly thanked the Wilfs for agreeing to a $50 million bump in their share in final negotiations this week.

"Without your willingness to take that last step, we wouldn't have crossed the goal line," the governor said.

The stadium project — with 51 percent of the construction cost covered by taxpayers — comes after years of state deficits and spending cuts to schools, health care and other programs. The state is currently in the black, but a $1 billion-plus deficit is projected for the two-year budget that starts in mid-2013.

Opponents on both sides of the political spectrum predicted that the state is likely to further expand gambling if the electronic pull-tabs — now just a low-tech paper game offered in bars and restaurants — don't bring in enough money.

"They'll want to double down on the bad deal. We've created a monster here," said Sen. Dave Thompson, R-Lakeville, leader of the conservative faction within the GOP Senate caucus.

Stadium supporters noted that the final deal required the team to round up $477 million from private sources, $50 million more than originally promised.

Sen. Doug Magnus, R-Slayton, said he is confident the gambling money will come through. The bill envisions the new electronic games bringing in $59 million a year in tax revenue by 2014. But if tax collections end up being lower, a sports-themed lottery game and a 10 percent suite tax would kick in. Together the two measures would raise $4 million a year, Magnus said.

"Certainly there are a lot of folks that are never going to support any stadium no matter if a fairy godmother dropped one next door to us," said Magnus, who participated in a legislative group that worked behind the scenes on a bill for two years.Over the long term, supporters also expect the stadium to be a good deal for the state. Sen. John Harrington, DFL-St. Paul, said he expects the return on the state's investment to be substantial over time. The Metrodome was built for $55 million, including $33 million in public money, and ended up bringing in hundreds of millions in tax revenue over the past three decades. Harrington said he voted yes on the stadium to help put people to work.

"I have 20 percent unemployment on the east side of St. Paul," he said. "I need every job in this bill that we can possibly come up with."

The deal guarantees the Vikings' future in Minnesota for three decades. Bagley said the team's billionaire owners, New Jersey developers Zygi and Mark Wilf, supported the final plan, even with the additional private cost, because time was running out. Senate passage came on the last day the Legislature was allowed to take votes.

The Vikings intend to take advantage of an NFL loan program, sell naming rights and possibly impose seat license fees to help cover the team's end of construction costs. They will be bound by a 30-year lease on the stadium and pay about $13 million a year in operating fees. Minneapolis will kick in about $7 million a year for operating costs, and a public authority will have the power to rent the stadium on non-game days for concerts, conventions and special events such as monster truck rallies.