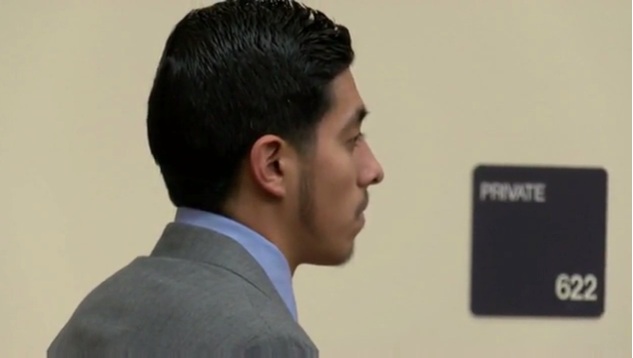 ALBUQUERQUE, N.M. -- A jury on Wednesday convicted a 20-year-old of beating two homeless Navajo men to death with cinder blocks and other objects as they slept, an attack that spurred officials in New Mexico's largest city to establish a task force on Native American homelessness.

After a full day of deliberations, jurors found Alex Rios guilty of two counts of second-degree murder after hearing gruesome details about the attack on Allison Gorman, 44, and Kee Thompson, 46, in a vacant lot in Albuquerque in July 2014. Each count carries a potential 15-year sentence.

Rios and two teenagers were charged with using cinder blocks, a table leg and their fists and feet to kill the men. The slayings shocked the city and led to creation of the task force, but prosecutors did not say the victims were targeted because of their race.

According to KRQE, the defense claimed Rios only watched as his friends attacked the homeless men. The attorneys believe the jury's lesser charge shows that.

"Obviously they didn't think he was as culpable as the other two and I think they sent a clear message that in a situation like this, the public expects people do more than just stand by," said defense attorney Daniel Salazar.

Salazar argued that prosecutors did not prove his client participated in the attack, saying Rios only witnessed from a distance, scared and in shock.

Prosecutor Vincent Martinez said the jury's decision was "just" and that he was satisfied with the outcome of the trial, even though he pushed for a first-degree murder conviction.

The youngest of the suspects was 15 at the time of the attack. He agreed to testify against the other two in a plea agreement offering the now-16-year-old the possibility of release at age 21.

The Associated Press is not naming the two younger suspects because of their ages.

The teen's testimony offered a chilling account of the attack that he said followed a night of drinking and drug use at a house party.

Sometime after the party, the three suspects went to an empty lot nearby and began attacking three homeless men. One of them was able to run away. Thompson and Gorman were sleeping, with one of them on a mattress and the other on the ground.

One teen used a wooden table leg to beat the men, while the 16-year-old was handed a cinder block and began hitting one of the men with it repeatedly, he testified.

He said Rios also hit one of the men. The teen said after about 30 minutes, the three went back to the house to get two knives, and all took turns stabbing the men.

"Obviously, it's awful. Your heart goes out to the victims' families," Salazar, Rios' attorney, said Wednesday.

The victims' family members, who attended the five-day trial, left immediately after the verdict was read and did not take questions from reporters.

Rios turned down a plea agreement. He also was convicted of numerous other charges, including assault, tampering with evidence and contributing to the delinquency of a minor.