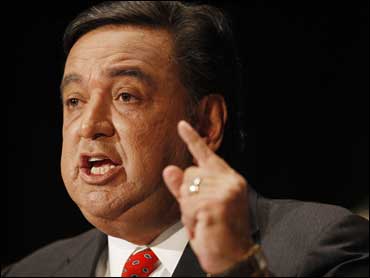 The bill replaces lethal injection with a sentence of life in prison without the possibility of parole.

The governor faced a deadline of midnight for making a decision on the bill that lawmakers sent him last week.

New Mexico is only the second state to ban executions since the U.S. Supreme Court reinstated the death penalty in 1976.

It joins 14 other states that do not have capital punishment.

New Mexico has executed nine men since 1933. The most recent execution was in 2001.

There are two men on death row whose sentences are not affected by the repeal.

Richardson had opposed a repeal in the past, but in signing it, his state became the second to ban executions since the U.S. Supreme Court reinstated the death penalty in 1976. New Jersey was the first, in 2007.

The state Senate voted 24-18 on Friday in favor of the bill. The House approved it a month ago.

Countrywide, death sentences and executions have been on a steady decline for more than a decade. Legislation being debated in several states to abolish capital punishment is getting more attention than in the past. Repeal legislation has passed the state Senate in Montana and awaits a House hearing. The state Senate in Kansas debated a repeal bill on this week.

President Barack Obama has said he is in favor of executions only in extreme cases, but has otherwise mostly avoided the issue and has no direct sway over states' death penalty laws. But he could appoint more liberal justices to federal courts who are less likely to impose death sentences.

In part, recent death row exonerations prompted by improved methods of testing physical evidence, including DNA samples, have planted seeds of doubt. And changes to state laws also have made a difference, as more states have been giving juries the option of imposing life without parole rather than death.

Financial necessity also is a driving factor. The death penalty is expensive - trials often require extra lawyers for appeals and higher security costs - and cash-strapped states are responding to the notion that it is cheaper to imprison people for life.

Observers caution that the death penalty is not likely to end soon in a country where polls still show 60 percent of people support executions. They point to the mostly conservative American South - which does not include New Mexico - as the major reason.

Of the 1,151 executions nationwide since the U.S. Supreme court reinstated the death penalty in 1976, the vast majority - 951 - occurred in the South, according to the nonprofit Death Penalty Information Center. New Mexico has executed one, convicted child killer Terry Clark in 2001.

Supporters of the death penalty object to murderers sentenced to life-without-parole ending up in the general prison population, and some argued Friday that locking up murderers for life could imperil corrections officers.

"There's no incentive for not killing a guard every time you get a chance," said Sen. Rod Adair, a Republican.

He called capital punishment "a just penalty for the most heinous of crimes in our society."

Opponents of repeal also said the death penalty is an important tool for prosecutors, who had asked lawmakers not to pass the bill.