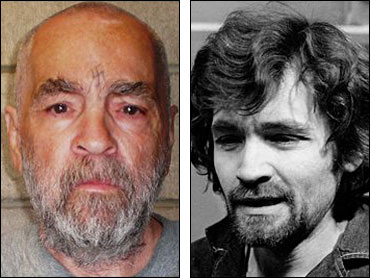 California corrections officials have released a new photograph of convicted mass murderer Charles Manson, who is now bald with a thick gray beard.

The photo of the 74-year-old Manson was taken Wednesday as part of a routine update of files on inmates at Corcoran State Prison, where he is serving a life sentence for conspiring to murder seven people, said Seth Unger, spokesman for the California Department of Corrections and Rehabilitation.

The cult leader was first sentenced to death for the 1969 murders of movie star Sharon Tate, coffee heiress Abigail Folger and three others stabbed and shot to death at Tate's home in Los Angeles. The next night, two others were stabbed to death at their homes.

The image - complete with a swastika carved into Manson's forehead - was released to the Los Angeles Times because the newspaper requested a copy the next time it was taken.

Manson's co-defendants - Susan Atkins, Leslie Van Houten, Patricia Krenwinkel and Charles "Tex" Watson - were convicted with him. Their death sentences were commuted to life when the death penalty was briefly outlawed in America in 1972.

Manson was born in Cincinnati and spent his early years in Ohio, Kentucky and West Virginia, according to Helter Skelter, the book by prosecutor Vincent Bugliosi about the Tate murders.