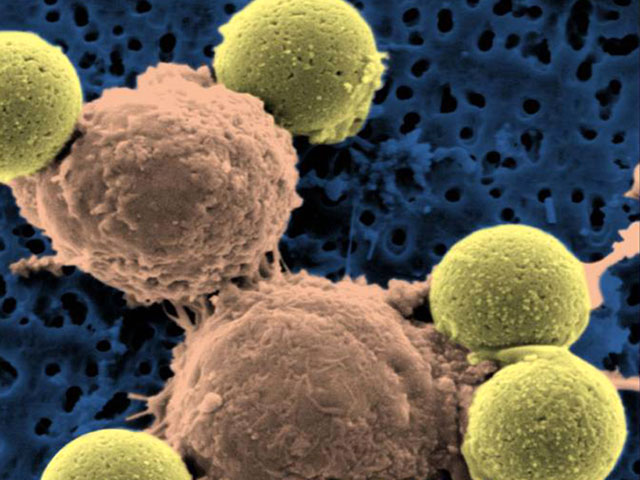 (CBS/AP) A new leukemia treatment has experts buzzing over a possible cure that may one day change cancer treatment forever.

How does it work? According to experts, the treatment is a gene therapy that turns a patient's own blood cells into assassins that tracks down and destroys cancer cells.

They've only tested it in three patients so far, but the results were noteworthy. Two patients appear cancer-free a year after treatment, and the third patient still has some cancer but is improved.

"It worked great," said study author Dr. Carl June, professor of pathology and laboratory medicine at the University of Pennsylvania. "We were surprised it worked as well as it did."

Currently, the only hope for a cure is bone marrow or stem cell transplants, which don't always work and can be fatal.

Scientists have been trying for years to find ways to boost the immune system's cancer-fighting ability. Earlier attempts at genetically modifying T-cells, our "bloodstream soldiers," have had limited success -the modified cells didn't reproduce well and quickly vanished.

June and his colleagues used a new technique to deliver the new genes into the T-cells with a signal that tells the cells to kill and multiply. That resulted in armies of "serial killer" cells that targeted and destroyed cancer cells, even new cancer cells as they emerged. T-cells typically attack viruses that way, but June says this is the first time it's been done against cancer.

For the study - published in the "New England Journal of Medicine" and "Science Translational Medicine" - scientists took blood from three patients with very advanced cases of chronic lymphocytic leukemia and genetically altered it in a lab. Then the scientists returned the blood cells to the patients in three infusions.

The scientists detailed the experience of one 64-year-old patient. There was no change for two weeks, but then he became ill with fever, nausea, and chills. He and the other two patients were hit with this condition that occurs when a lot of cancer cells die at the same time - a sign that the gene therapy is working.

"It was like the worse flu of their life," June said. "But after that, it's over - they're well."

The main complication from the therapy seems to be that it also destroys some other infection-fighting blood cells, requiring additional monthly treatments for the patients.

Scientists now want to test the gene therapy technique in leukemia-related cancers, as well as pancreatic and ovarian cancer, June said. Other institutions are looking at prostate and brain cancer.

"This is a form of what I would call ultimate personal therapy," June told CBS News' Dr. Jon LaPook. That's a wave of the future."

Dr. Walter J. Urba, director of cancer research at the Providence Cancer Center in Portland, Ore., called the findings "pretty remarkable" but was cautiously optimistic because of the study's size.

"It's still just three patients," said Urba, one of the authors of an accompanying editorial in the New England Journal. Three's better than one, but it's not 100." He says the key is what happens to these patients years from now.

Dr. Kanti Rai, chief of hematology, oncology at North Shore-Long Island Jewish Medical Center in N.Y., could hardly contain his enthusiasm despite being admittedly more reserved when he comments on studies like these.

"It's an amazing, amazing kind of achievement," he said.

One of the patients released a statement through the university. The man who did not want to be identified, himself a scientist, said he's "very lucky."

Although he wrote that he didn't feel that way when he was first diagnosed 15 years ago at age 50. He was treated successfully with chemotherapy for years until standard drugs no longer worked.

How is he now?

"I'm healthy and still in remission," the man said. "I know this may not be a permanent condition, but I decided to declare victory and assume that I had won."

More than 44,000 Americans are diagnosed with leukemia each year while nearly 22,000 succumb to the disease.

The National Cancer Institute has more on leukemia.