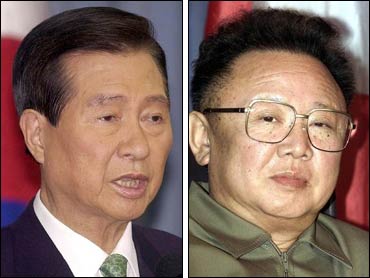 Kim faced a scandal in the final days of his presidency after government auditors disclosed Thursday that South Korea's Hyundai business group drew $186 million from a government-owned bank shortly before the summit and allegedly spent the money on unspecified projects in the North.

Opposition lawmakers demanded Kim clear up allegations that the money was part of payoffs to North Korea to hold the summit. Both President Kim and Hyundai have denied wrongdoing.

Kim, who leaves office in late February after a five-year term, says money spent by Hyundai in North Korea was necessary to promote "peace" and "national interests."

In the North's first reaction to the sandal, Ri Jong Hyok, vice chairman of the North's Korean Asia-Pacific Peace Committee, told South Korea's SBS TV that all transactions between Hyundai and North Korea were legal.

"The North and Hyundai have done business since 1998, and suddenly linking the money to the 2000 summit is a sinister plot," SBS quoted Ri as saying in an interview in Pyongyang.

Kim won the Nobel Peace Price in 2000 chiefly for his efforts to reconcile with North Korea by holding the June summit with its leader, Kim Jong-Il.

Ri's committee, a government organ, handles North Korea's joint ventures with South Korea, including Hyundai's investment projects to build an industrial park in the impoverished country and to take tourists to its scenic Diamond Mountain through the heavily armed border zone.

In a money-losing project that began in 1998, Hyundai has taken tourists to the Northern mountain by cruise ship. Overland access will make the tour cheaper and attract more tourists.

In a statement carried by the North's official news agency, KCNA, the committee suggested the two Koreas should open their border between Feb. 4 and Feb. 14 to let the tour travel on a newly built road, the first cross-border link since the 1950-53 Korean War.

Hyundai pursues the cross-border tour under the auspices of the South Korean government, which supports it to encourage rapprochement with the North. The North gets badly needed cash in tourist fees.

The Korean border is sealed and there is no direct traffic between the two sides. They are still technically at war after the 1950-53 Korean War ended in an armistice, not a peace treaty.