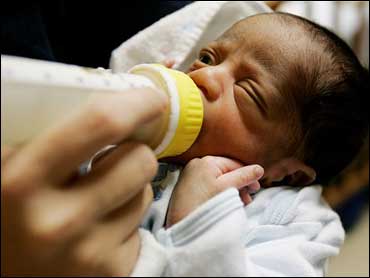 Please, she said to herself, please don't let me give birth to my twins in this hot, dark attic surrounded by water. Finally, using a crowbar and hammer, friends pried open the roof and she made her way out by a leaky boat.

Then came her dramatic delivery.

After a few days in the Superdome, an ambulance rushed the woman out of the chaos toward a waiting helicopter. But before she arrived, Dwight and Dwayne entered this world — nine pounds in all — one month early. "It was a miracle," their mother, Antoinette Hickerson, says with a still-dazed smile.

Hickerson has to find a way to care for her premature twins even though she and her partner, Dwight Ward, have no home, no money, no jobs. They're now living in a special shelter for newborns at St. Patrick Catholic Church, trying to figure out where to go next.

Hickerson is among hundreds of Hurricane Katrina survivors who were rushed to this city — often by helicopter or ambulance — to deliver their babies. They now face the enormous pressures of being new mothers even as they struggle to piece their lives back together.

That's where folks here have come to the rescue: A network of hospitals, churches and volunteers has embraced new and expectant mothers, providing them with the daily necessities of life — along with a sense of hope.

Churches have converted parish halls and sanctuaries into temporary homes and nurseries, often with private rooms. Clothes, baby food, cribs, strollers, toys and blankets have been donated by the truckload. Volunteers have chauffeured moms to doctors, tracked down missing family members and wiped away tears.

"Every possible stress you have has got to be there," says Beth Manning, director of social services at Women's Hospital in Baton Rouge. "The baby blues, being separated from your family, and also not knowing where you're going to go or what's going to happen in the long run."

Workers at the hospital were thrust into the maelstrom even as Katrina was battering New Orleans. Helicopters and ambulances began ferrying in babies and expectant mothers, some in early labor.

"We had huge military helicopters coming in one after another," says Susan Eaton, a social worker at Women's Hospital, where about 300 Katrina evacuees have given birth. "It really did feel like we were in a war zone."

It became immediately apparent that something had to be done for women once they could leave the hospital but had no place to go, no money, and no family to pick them up.

"We didn't want to stick them with brand-newborn babies in shelters with thousands of people," says Cheri Johnson, of Baton Rouge General Medical Center-Bluebonnet. "There's no good access to running water. It's a breeding ground for germs."

University Presbyterian Church welcomed several women, including Angela Davis, who was eager to have a private room with her baby son, Taji, after leaving a giant city shelter she had stayed at with her grandparents.

"You can't give a baby a bath with a thousand people running in and out," she says.

A computer-savvy volunteer also helped a tearful Davis locate two other sons — 2 and 3 — who lived with their father and appeared to be missing right after the storm.

St. Luke's Episcopal Church transformed its parish hall into a dormitory for new and expectant mothers and their families. One man arrived after hitchhiking from New Orleans with his two children so he could join his wife, mother of a new 1-pound, 4-ounce baby.

They helped one mother with a baby in intensive care track down her 10-year-old son, who had been taken to a shelter in Thibodaux, 50 miles away. And they reunited a 17-year-old pregnant teen with her grandfather in St. Louis.

"We're trying to show them we haven't abandoned them," says the Rev. Ernest Saik. "They're a human voice and not just a number. We're hearing their stories. We want to make sure we're tending to their needs."

Shannon Easley did that — and so much more.

A secretary in the neonatal intensive care unit of Women's Hospital, she befriended Rosezina Jefferson, a new mother who had arrived from New Orleans with an amazing tale of survival.

When Katrina struck, Jefferson was just days away from her delivery date. But when her 5-year-old son, Ashton, started having an asthma attack, she was determined to get medical help, even though floodwaters were swallowing her neighborhood.

Though she was 40-weeks pregnant, the 400-pound woman inched her way down the fire escape of the two-story building, plunged into the filthy water wearing just a sleeveless dress and swam in search of help.

"I said, 'The Lord be with me. Whatever happens, happens.' ... I wasn't thinking about being pregnant and what could happen in the water," she says. "My main focus was Ashton."

Even when she could feel contractions, Jefferson managed to swim through the water reeking of gas and swirling with branches and strange bugs.

"You get your strength from somewhere," she says. When the Coast Guard plucked her out, she begged them to go back and get her son. But she already was in labor and was rushed out by helicopter, eventually making her way to Baton Rouge.

The next morning, she gave birth to a son, Keith. Within days, she found out her 5-year-old, Ashton, and her fiance, also named Keith, had made it to Houston.

By then, Jefferson had become friends with Easley who called her husband, Willis, and explained the family's predicament.

"Are you thinking what I'm thinking?" she asked him. He was.

The two piled in a truck and made the 10-hour roundtrip, picking up Jefferson's son and fiance and surprising the new mother back at a church shelter.

Jefferson is now staying at the Judson Baptist Church — the Easleys are members there — and has a room with a crib, a swing and everything her baby could possibly need.

She's not sure where she'll eventually settle.

It will take time and patience for Jefferson and other new mothers to get back on their feet.

Still, some good has emerged from the hurricane, says Eaton.

"The bonding between mothers and babies is more intense and stronger from the first moment," she says. "Everyone has the feeling we're going to survive all this. ... Right now, everybody can appreciate life better."