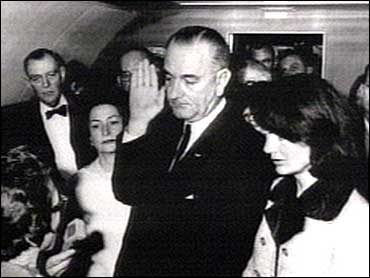 It is the 39th anniversary of President John F. Kennedy's death, and there is new audiotape and film of events surrounding that tragic day.

The film has not previously been shown to the public.

In the footage, movement in the sixth-floor window of the building can be seen and it is from that window, the Warren Commission concludes, that Lee Harvey Oswald fired the shots that killed Kennedy.

Within seconds, chaos erupts in Dealy Plaza as the motorcade speeds to Parkland Hospital.

The public can now also hear a chilling radio transmission.

As the events unfolded on television, the President's closest advisors were flying 4,000 miles over the Pacific receiving little information. Radio transmissions picked up their historic conversations. The conversation recorded on audiotape recently discovered at the National Archives.

"I read uh, from the AP bulletin, uh, Kennedy apparently shot in head, he fell face down in back seat of his car, blood was on his head. Mrs. Kennedy cried, 'Oh no,' and tried to hold up his head," the radio operator describes.

Relying on press reports, they learn the events that transpired. Their voices remain calm, unemotional.

Pierre Salinger, President Kennedy's press secretary asks, "The president is dead, is that correct?" To which the radio operator replies, "That is correct."

Now, aboard Air Force One in Dallas are Mrs. Kennedy, code-named 'Lace', and Vice President Lyndon Johnson, code-named 'Volunteer', about to take the oath as President. On the tape the following conversation is audible:

"We are waiting for the judge to appear for swearing in."

"That is for Volunteer, right?"

"Yes, we are having one. Getting one here to have it done before we take off."

"That's affirmative. Do you have any idea of what Lace wants to do and what Volunteer wants to do on their arrival here?"

Rather reports that as Air Force One heads back to Washington, arrangements are being made for handling the remains of the slain president.

"We do not want a helicopter for Bethesda medical center. We do want an ambulance and a ground return from Andrews to Walter Reed. And we want the regular post mortem that has to be done by law under guard performed at Walter Reed. Is that clear," the voice says.

There are also photographs and film not previously viewed by the public. They are on display at the former Texas School Book Depository and they show movement from the 6th floor window.

Maureen Hughes-Thompson donated to the museum footage that her late husband, Robert Hughes, took showing Kennedy's motorcade in Dealey Plaza and the assassination scene afterward. The well-known footage shows movement in the sixth floor window of the Texas School Book Depository, from where authorities say Lee Harvey Oswald fired a rifle at the motorcade.

Among the 20 photographs donated by Jay Skaggs are two that show police Lt. Carl Day carrying a rifle from the building after the assassination. The museum said the photos are the only known color photographs of the event.

"The Kennedy assassination is very long, very confusing and all we can do is list the facts and explain the history," Gary Mack, the museum's curator, tells CBS News.

The history is what draws many to see the artifacts and documents on display and to Dealey Plaza where the tragedy unfolded. Many photographers still make their way here, just as they did on that day 39 years ago.