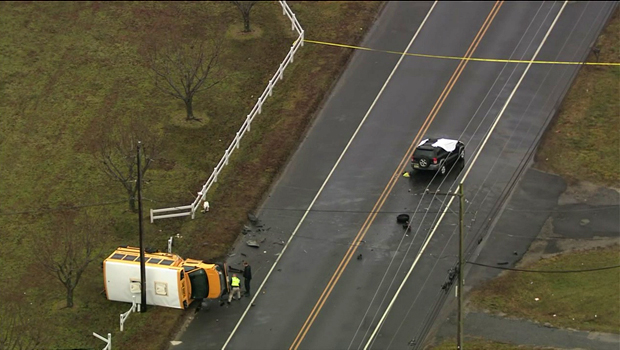 BRIDGETON, N.J. -- One person is dead and four children hurt after an SUV and a school bus carrying special needs students collided in southern New Jersey.

State police say the SUV driver was pronounced dead at the scene Thursday morning. The students on board the Bridgeton Public Schools bus suffered minor injuries.

Video from the scene shows the small bus on its side and the crushed front of the SUV covered in a sheet or tarp.

The crash happened in Bridgeton, about 35 miles south of Philadelphia, CBS Philadelphia reports.

School Superintendent Thomasina Jones says the students on board range in age from 11 to 17.

Jones says the bus driver and a bus aide were also hospitalized. State police said the injuries to the adult bus passenger are considered serious.

Jones told CBS Philadelphia that the students were being bused from the Bridgeton area to schools outside of the district due to their specific special needs.